Comics made an unusually big splash in politics and news last weekend. Wiccan and Hulking’s embrace and gay kiss in AVENGERS: THE CHILDREN’S CRUSADE has been the center point of a LGBTQIA+ rights controversy in Brazil. Far-right Mayor of Rio de Janeiro, Marcelo Crivello, was so scandalized by the comic’s gay kiss, he demanded the removal of AVENGERS: THE CHILDREN’S CRUSADE at a popular local Brazilian book fair, Bienal do Livro. He claimed that the image made the books dangerous. Crivello cited the Children and Teenagers Statute, which states that any “pornographic images” need to be marked for underage audiences. Under the statute, YOUNG AVENGERS would need end up wrapped with a content warning. 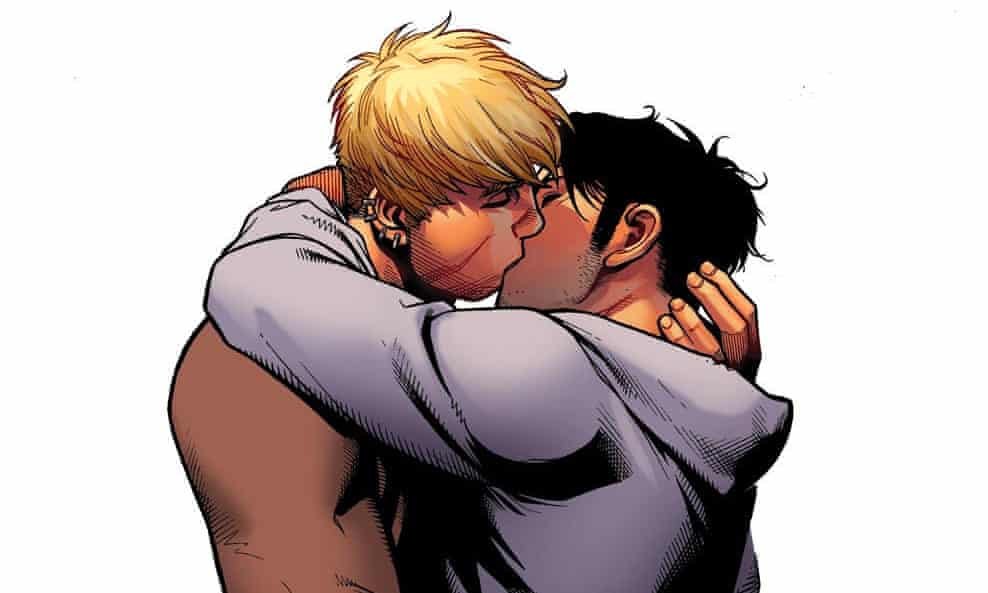 Ban Struck Down By Supreme Court and Rebuked By The Public

However, the Supreme Court of Brazil strongly rebuked the Mayor. The institution stated that he cannot specifically target the LGBTQIA+ content for censorship. Doing so would be a violation of the constitution’s guarantee of equal protection for all, stated the court. So, in good news, LGBTQIA+ content and AVENGERS: THE CHILDREN’S CRUSADE remained accessible at the book fair.

Public outpouring of support for the comic and LGBTQIA+ rights also pushbacked strong against Crivello’s homophobia. His attempt to ban the comic actually led to widespread purchase of the comic. All of the issues sold out before the festival even began. Brazilian newspaper Folha de São Paulo ran a large image of the controversial kiss on its front page. A popular Brazilian YouTuber, Felipe Neto, even paid for and disseminated 14,000 books with LGBTQIA+ themes at the book fair.

Jim Cheung, the comic’s illustrator, stated that he was surprised that a more than 10-year-old scene was receiving attention and that it, “merely depicts a tender moment between two characters who are in an established relationship.” He voiced his support for the LGBTQIA+ community and stated that “[It] is here to stay, and I have nothing but love and support for those who continue to struggle for validity and a voice to be heard.”

Teddy & Billy (2019) . It was with great surprise today, to learn that the mayor of Rio de Janeiro decided to ban the sale of my (and Allan Heinberg's) book, Avengers:The Children's Crusade, for alleged inappropriate material. . For those not familiar with the work from 2010, the controversy involves a kiss between two male characters. . Now I don't know what prompted the mayor to seek out a work that is almost a decade old, and that had already been on sale for many years, but I can say honestly, that there was no hidden motivation or agendas behind the work in promoting any particular lifestyle, nor targeting any unique audience. The scene merely depicts a tender moment between two characters who are in an established relationship. . As an artist, my passion is to tell stories; stories of great heroism, compassion and love, with as authentic and diverse characters as possible. Characters that depict every walk of life and color, whether they be black or white, brown, yellow or green. . The fact that this book, from almost a decade ago, is now being drawn into the spotlight by the mayor perhaps only highlights how out of touch he might be with the current times. The LGBTQ community is here to stay, and I have nothing but love and support for those who continue to struggle for validity and a voice to be heard. . I hope the beautiful people of Brazil, the wonderfully diverse and proud nation, will see through this political 'noise' and place their focus on the light, and on ways to unite, rather than help sow the seeds of conflict and division . #TeddyAltman #Hulkling #BillyKaplan #Wiccan #YoungAvengers #AvengersChildrensCrusade #MarvelComics #Marvel #Comics #MCU #pencils #pencildrawing #process #JimCheung #LoveNotHate #LGBTQ

The idea that anything involving two same sex individuals in love is inherently pornographic is a trope that needs to die a thousand deaths. If Billy Kaplan (Wiccan) was Wilhelmina Kaplan, would this be a story at all? Of course not. Rio’s mayor would not have blinked, nevermind demand the censoring of YOUNG AVENGERS.

There has never been a reasonable excuse to treat LGBTQIA+ people like second class citizens. It is even more unreasonable in the year of our Lord 2019. Truth be told, excepting acts of hate or shocking violence, there is no reason to treat anyone as second class citizens. This nonsense has to end. We thank the Supreme Court of Brazil for realizing and making a decision based in this reality.