Sexual violence is not a pleasant topic. However, media often uses this form of violence as a plot device, sometimes with blatant disregard for the consequences. Therefore, we have a social obligation to discuss the effects and causes of sexual violence in order to better understand it. Hopefully, this understanding will lead us to demonize and eradicate it. This brings us to the complicated topic of sexual violence in THE BOYS.

Amazon Studios’ THE BOYS is based off the Dynamite comic series of the same name. It’s an incredibly well-made piece of television and I’d encourage anyone to give it a watch. But the thing should come with trigger warnings. Yes, that’s trigger warnings, plural. The amount of sexual violence in THE BOYS is honestly staggering. The depiction of these moments is extremely jarring. Even as someone who has only had mild experiences with it or has witnessed more severe cases through loved ones, it shook me to my core.

So this begs a discussion. How does this show approach its scenes of sexual violence, as well as the characters involved? Is it gratuitous, or does it want to push us to the edge to make the experience more real? Without fully knowing the intentions of the creators, let’s dissect the role of sexual violence in THE BOYS.

I’ll be discussing these scenes in chronological order, and there are major spoilers ahead.

The First Instance of Sexual Violence in THE BOYS

THE BOYS wastes no time introducing this topic. In the pilot, we meet Annie January, aka Starlight. She so badly wants to be a superhero and do good. When she’s invited to join the most elite team in the world — The Seven — she’s thrilled. Upon joining, the first teammate she encounters is The Deep. After he implies that Annie probably had a thing for their leader, Homelander, while she was growing up. She shyly explains that she was actually a fan of his. When she turns around to face him, The Deep’s pants are down.

She’s horrified. He dismisses her feelings. After all, she mentioned she had a crush on him. When she still does not consent, he says he can easily get her kicked off the team. Though we don’t see the rest of the assault, we know that Annie is forced to perform a sex act on The Deep. We see the aftermath, and she later talks about it.

Let’s make it abundantly clear that rape by coercion is absolutely, 1000%, rape. The Deep is a rapist. Annie is a survivor of sexual violence. THE BOYS does a good job of never questioning this. And I will applaud the show for not focusing on this as the primary character trait of Annie. Though it absolutely affects her, it does not cripple her. I do appreciate that nuanced approach. I also appreciate that the public seems to believe Annie even as I acknowledge that is often not the case in real life. As far as we’ve come, we have light years to go in this arena. 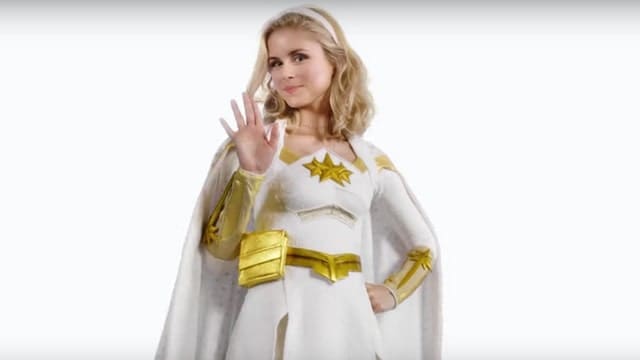 Starlight in THE BOYS (Courtesy of Amazon Studios)

This scene not only shocks but sets the foundation of THE BOYS’ culture of sexual violence. It only gets more intense from there.

Later, we see a character named Popclaw kill her landlord while he performs oral sex on her. This is an absolutely wild scene, but it remains extremely necessary to dissect.

On the surface, it’s a murder that takes place during a sex act. I have even said in a podcast about THE BOYS that this isn’t really rape or sexual assault because the sex itself is consensual. But in all honesty, that’s not accurate.

I have to correct myself on that because I forgot a very important factor. The landlord does indeed remove his consent when Popclaw starts to squeeze his head too forcefully. Of course, consent can be rescinded at any point in time during sexual contact, so this does become sexual assault. It’s the first time we see a woman as the perpetrator of sexual violence in THE BOYS, but it is not the last.

This moment is difficult, though, because while it’s disgusting and horrifying, it also almost played for laughs. The dude’s head explodes and Popclaw climaxes at the same time. I’m not sure if the intention is to be funny, but I was not amused. And therein lies the problem with this scene.

It’s not clear. None of it is. Was this assault? Is it funny? What was really the point of it? (You could have the Boys get information out of Popclaw in other ways.) It’s mildly gratuitous, and the show does not really linger on it, discuss it, or make a judgement about it at all. Popclaw does have some regrets and feelings about it, but she’s more concerned with her relationship with A-Train. Besides that, it just happens and we move on. And that’s pretty fucked up.

Sexual violence in THE BOYS becomes the main motivation for some characters. Our guy Billy Butcher has a big problem with Homelander. The super is a damn sociopath to say the very least, but that’s not exactly why Butcher is after him. It’s more personal than that. Butcher says that Homelander raped and killed his wife. This is a major plot point, but we are not actually sure it’s what happened. There is evidence of Becky being in emotional turmoil and some kind of experience with Homelander, but the exact details are unknown. 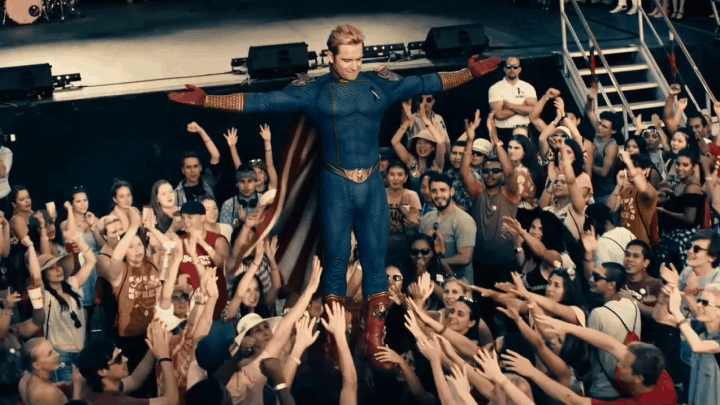 Homelander in THE BOYS (Courtesy of Amazon Studios)

The issue is that we never get to hear from Becky herself. We see her at the end of the series, and we know that she is the mother of Homelander’s child. But we do not get to hear directly from Becky what actually happened.

But even more dire and disappointing is the fact that this is fridging. This refers to the (abhorrent) plot device of  killing or permanently, dramatically, harming a women, who only exists in the narrative in relation to a man, in order to motivate that man. Basically, you harm a woman to send a man on a journey. It’s exactly what happens to Hughie’s girlfriend, Robin. So Butcher and Hughie’s entire relationship stems from the fact that both of their partners were fridged. And even if that’s not exactly what happened to Becky, the narrative assumes it is. It’s all very infuriating.

The Deep sucks. There’s no disputing that. Even as much as the show tries to create sympathy for him, I’m not convinced. But that does not make his assault any less terrible.

We don’t often talk about sexual violence against men, with women as the perpetrators. But it happens. In fact, as estimated one in ten rape victims is male. And it says something that the only instances of sexual violence in THE BOYS that are graphically shown on screen are the ones in which men are the victims.

A woman rapes The Deep by fully inserting her hands into his gills. And we see almost every second of it. This is not a short scene. It goes on for a while. It is one of the worst things I have ever seen in my life. I turned away, I sobbed, I hyperventilated. I nearly had a damn panic attack. 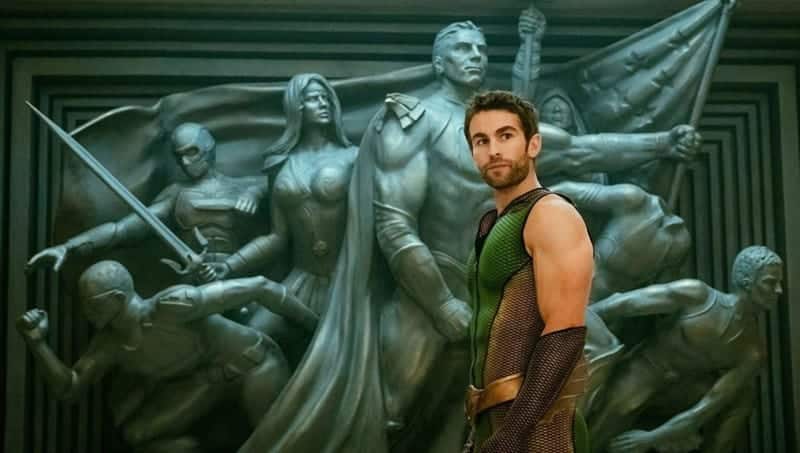 The Deep in THE BOYS (Courtesy of Amazon Studios)

Speaking in the Binary

But at the same time, because those gills look similar to vaginas, you could argue that this scene feminizes The Deep. This could further the idea that male victims are inherently feminine, which is not true at all. This is not to say that men having traditionally female traits is negative. It just seems to further the idea that being a victim of sexual violence is solely a female trait. This is simply untrue and dangerous.

I’m also aware that I’m speaking of gender as a binary right now, and it is not. The show does not really discuss gender as a spectrum, nor the existence of anyone who isn’t cis, so I don’t think it’s trying to make a point regarding this significant segment of the population. However, that is obviously a very important, worthwhile discussion. That said, as a cis woman, I don’t think I’m particularly qualified to start that discussion. I’ll take my cues from people who are part of those communities.

The only moment in THE BOYS that may be making a statement regarding gender fluidity or the trans experience is not exactly a positive one. Very briefly, we meet a character who presents as traditionally male and is a shapeshifter. By taking the shape of someone who presents traditionally female, they seduce and blackmail a senator by transforming back into their traditionally male form during the sexual encounter. Not only can this be considered assault, but it contributes to a very damaging myth surrounding the trans community. We often see this “bait and switch” in media, demonizing trans people and implying that they’re out to seduce and “trap” cis-het men while “concealing their nature.” This is obviously a disgusting trope.

And while this character does not outwardly identify as trans or gender fluid, it’s pretty easy to draw those parallels. Even if the show wasn’t trying to make this kind of point, the situation is dubious at best.

As I said, sexual violence in THE BOYS is complicated. It is a very prevalent plot point. There is often nuance in its presentation. Also, there is a lot of it that is quite questionable. There are aspects that I can appreciate and things that I’m still mulling over in my head.

It is also not the only important topic discussed in the Amazon Studios show. There is a ton of social commentary in THE BOYS, and I could talk about it for hours.

So to hear me and a couple of my friends break the show down further, and more generally, take a listen to our podcast.