JOKER dominated the box office this past weekend and seems poised to repeat again this weekend. While a very different kind of Joker story, no doubt many of you came away from it wanting to explore the Clown Prince of Crime a bit more. To that end, allow us to introduce some excellent Joker stories from the past 30 years of comics. 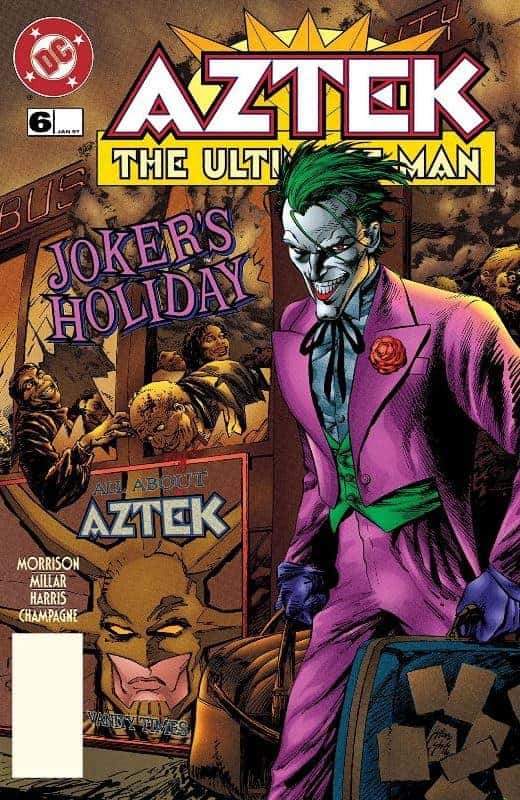 Every year, according to this two-parter, Joker leaves Gotham for a little while to visit somewhere even worse than the City. For this year’s vacation, he has selected the “sick city” of Vanity, the place Aztek has recently decided to call home.

A showcase for Grant Morrison’s — co-writing here with Mark Millar — theory of the Joker as a constantly metamorphosizing in goal and presentation “super sane” almost-cosmic being, the story follows the chaos the villain can enact wherever he goes. It also wonderfully highlighted how Aztek was a force of purity in a very impure place but that did not make him simple or unintelligent.

While N. Steven Harris’s art with Keith Champagne are probably not for everyone, it works wonderfully here for me. All sharp angles and rigid lines, Harris’s Joker feels otherworldly and unpleasant, a virus in human form. Mike Danza on colors helps complete the effect, using a largely muted pallet except to capture Aztek himself.

There are some other delights beyond the Joker here that make me want to recommend the whole series to you. For now, though, this is a great Joker tale. 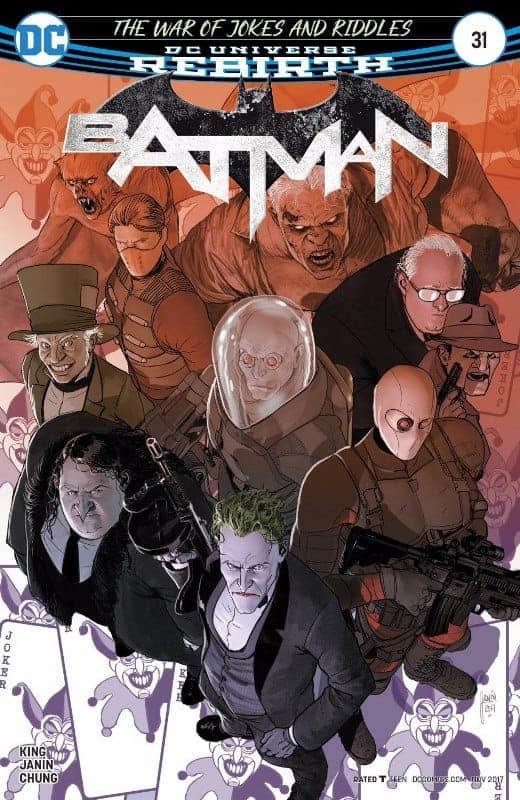 Tom King — in the midst of the Batman-Catwoman romance he has been pursuing throughout his run on BATMAN — took the time to look back to an early event in Batman’s career. Joker, no longer able to laugh, has been “auditioning” comedians and slaughtering them for their failure to shake his malaise. Riddler, just escaped from Arkham, feels he has been similarly stymied and know why: Batman.

However right he may be, Joker does not care for his hypothesis or proposed solution, a villain team-up. Instead, he shoot Riddler in the gut and triggers the War of Jokes and Riddles. Gotham is swept up in the two villains attempts to destroy one another with nearly all of Batman’s rogues choosing sides.

After all the casualties, the destruction, the pan, however, the real damage lies in a single moment, a decision derailed. Someone saves Batman and it is easy to understand why the Dark Knight has been haunted by that act ever since. 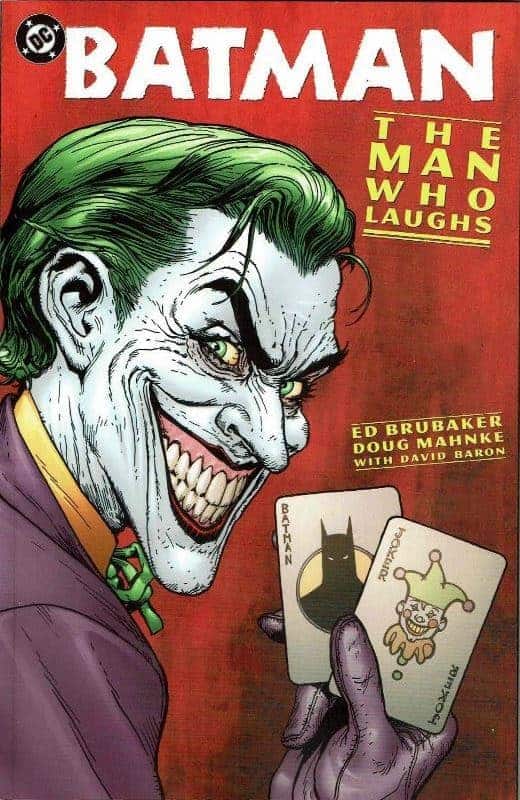 A kind of Year One for the Joker-Batman relationship. This Ed Brubaker penned, Doug Mahnke drawn, and David Baron colored one-shot adapts and updates the events of BATMAN #1.

Mahnke’s signature art is both ghastly and gorgeous, perfect for the subject matter. Baron’s colors make a strong compliment to the art. He really nails the darkness and grit of typical Gotham. Plus, when Joker is on the page, he smartly demonstrates how the Clown Prince of Crime infects the world around him. His chalk white skin, his bright green hair, and his taste for purple turn the pages garish. He is an invading virus.

For fans of the kind of iconic meat and potatoes take on Joker, it is hard to do better than this in the past 30 years. Brubaker really “gets” that classic version of the Joker: smart, cruel, and finding it all so hilarious.

The real highlight, though unsurprisingly, is Brubaker’s take on Gordon early in his career when he has not yet ascended to Commissioner. His struggle to process not just Batman and the Joker, but the circles he now must interact with to achieve justice. In some ways, it is clear he feels more comfortable in the superhero/supervillain world than he does in the echelons of the rich people he finds himself protecting. 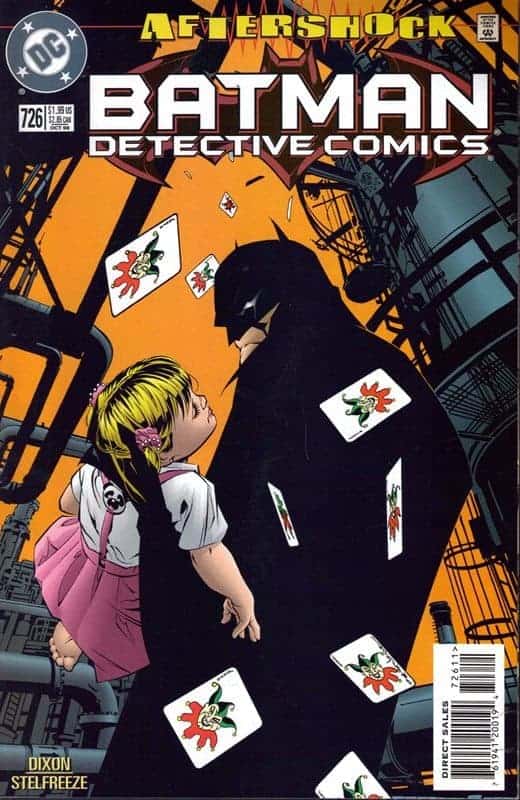 Sometimes Joker does not need even to lift a finger to twist around Batman’s entire world.

When a little girl is abducted but the man responsible quickly ends his own life, Batman seemingly has an impossible situation. How can he find the kidnapping victim with no clues and the perpetrator dead? However, he quickly realizes that the deceased criminal had a cell next to the Joker in Arkham. With no other choice, the Dark Knight has to engage his nemesis in a battle of wits to unravel the abductor’s plan.

However, what really hurts is how Joker reacts when Batman finally refuses to play the game any longer. The revelation of what day this crime is unfolding paired with Joker’s reasoning for doing what he’s done is an act of simple, brutal emotional cruelty.

Chuck Dixon delivers his usual solid scripting here, but the MVP goes to Brian Stelfreeze. He’s an artist who’s work I never get tired of and is particularly well-suited to capturing Batman on the page. 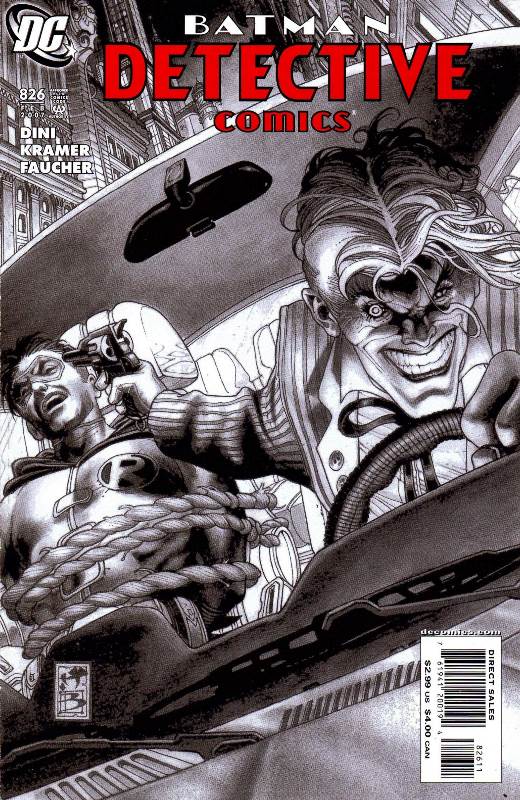 Don Kramer has never gotten enough credit. He is a solid artist in general with a good sense of action and figure work. However, he truly excels when it comes to capturing Joker’s facial features. The way he renders Joker’s rictus grin while still conveying emotions through the villain’s eyes is impressively subtle.

If you enjoy the version of the Joker used in BATMAN: THE ANIMATED SERIES, you’ll like how Paul Dini writes the Giggling Goon here. He feels like Mark Hamill’s interpretation put to the page. Even the expression Joker pulls when denied an item at a fast food restaurant is distinctly Animated Series.

For me, though, the real draw is the story. I love a “bottle episode” done well and ‘TEC #826 is that in comic book form. In the tale, we spend an hour with Joker driving around Gotham City. A pile of presents and his first two victims, a husband and wife who will never get a chance to share their Christmas Cheer, are stacked in the backseat. In the passenger seat, Robin (Tim Drake, the best Robin) is trussed as a hostage. Forced to endure Joker’s rampage, Drake has to look for his opening and take his shot lest he end up the night’s final victim.

It’s tense, it is a strong revisitation of the Joker-Robin dynamic, and it demonstrates what makes both Tim Drake and Joker such interesting and involving characters. 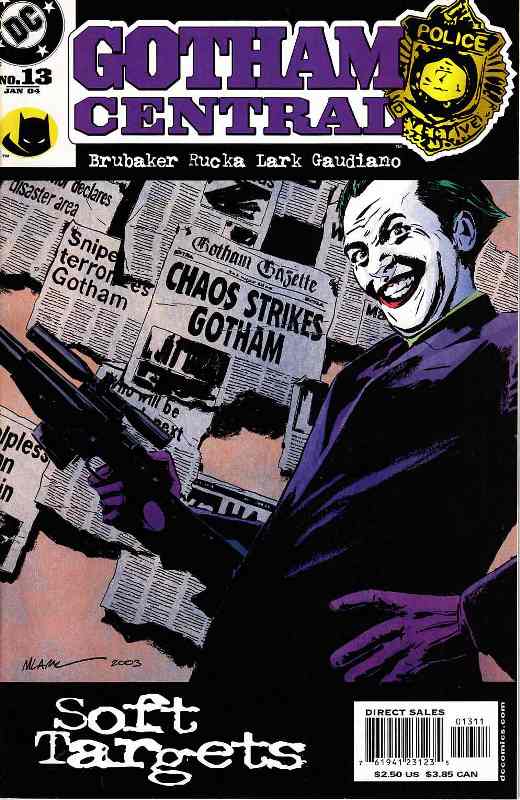 One of the few stories that makes Joker legitimately terrifying by keeping his evil intensely down to earth. Using only a webcam and a sniper rifle, Joker has the GCPD and a tremendous amount of the city hostage.

Too often, writers feel the need to make Joker titanically monstrous. There is a sort of escalation of him until he becomes unrecognizable as a “real” character. The spectacle becomes so much, so all encompassing that the scenario is all that matters. One needs to out do Joker’s last caper, regardless of if it makes for a good story.

Here, Ed Brubaker and artists Michael Lark and Stefano Gaudiano smartly go in the other direction. Joker does not need to be killing every Batman family member to be scary. He does not need to murder an entire nursey of babies to be a threat. All he needs is a gun, a webcam, and his own terrible mind. It is a simply approach to the villain but it makes him an utterly chilling figure. 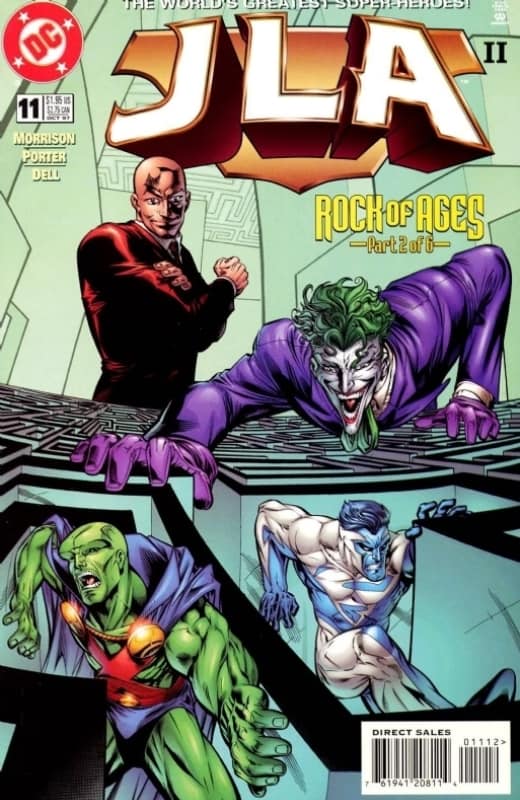 Lex Luthor has decided to destroy the Justice League using the playbook of a corporate raider. Joker, and Joker’s damaged and dangerous mind, appears integral to the plan. Batman may be better at this game of corporate intrigue turned super powered warfare but can he outthink Superman’s greatest foe and his own?

As readers of Rock of Ages know, the storyline gets far more complicated than just a face off between the JLA and Luthor’s Injustice Gang. However, along the way, we get to witness the horror of Martian Manhunter trying to adapt to navigating the Clown Prince of Crime’s brain and what a number it does on J’onn to go there.

There is also an excellent moment, later on, that shows how incredible a manipulator Luthor can be as he “pushes” Joker to an act that ensures the Injustice Gang cannot be touched for all the havoc they wreaked.

I love Grant Morrison’s JLA. I am a total sucker for this era Howard Porter art, warts and all. This story was and remains like catnip to me. Simply put, I adore it. 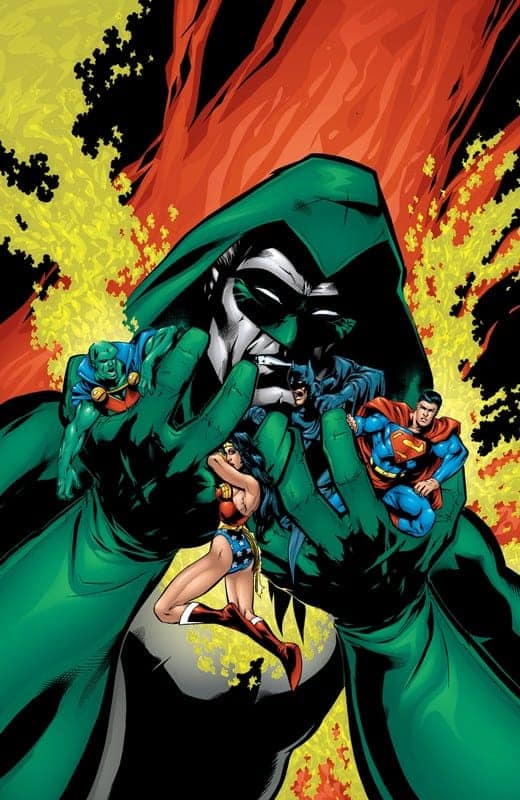 One of the few issues of JLA during the first 50 issues that Grant Morrison did not write, this J.M DeMatteis penned and Mark Pajarillo drawn tale picks up in the midst of the DAY OF JUDGMENT crossover event.

The Spectre, now Hal Jordan, has become overwhelmed and despondent in his new role. He sees sin all around him. With each act of vengeance, he finds it harder and harder to sort the guilty from the innocent.

The JLA try to engage with him, to give a sense of perspective and equilibrium but their own sins only make him more convinced that no one is worth saving. Martian Manhunter, however, has an idea. A philosophical counterpoint he asks Jordan to consider. On the precipice of Spectre laying waste to humanity, J’onn asks his former teammate to ponder the inverse of his thesis.

How does Joker end up fitting into all of this? Well, you gotta read the issue to see that. But trust me, it is well worth the reveal. 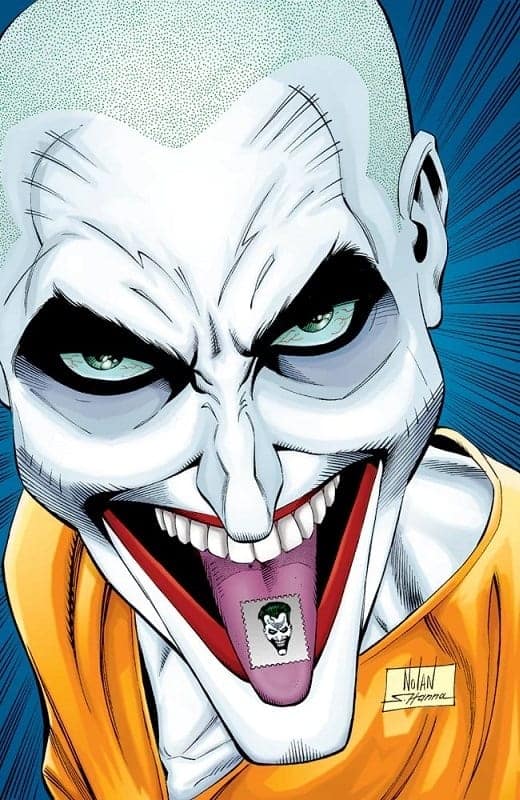 When I first started actively collecting and reading comics, writer Chuck Dixon and artist Graham Nolan were “my” Batman creators. I loved Nolan’s interpretation of the Bat and his world. For some time it represented my platonic ideal of how the Dark Knight should look at move. Dixon, it seemed, had a hand in every Bat-event and Bat-related offshoot title. At one point, he was writing ROBIN, NIGHTWING, and BIRDS OF PREY all at the same time. Thus, his action heavy approach to the character defined Batman for me for years.

This story, however, takes a bit of an offbeat approach for a Dixon joint. While still action-packed it was far headier than most Batman stories of the era. It revolved around the idea of Joker being arrested and facing a real prison sentence, not yet another trip to Arkham, for the first time. The case seems a slam dunk. No chance of Batman’s greatest nemesis wriggling out of this one.

The only problem? Joker didn’t do it.

Batman, due to his dedication to justice above all else, cannot ignore this. Joker cannot go down for a crime he did not commit. It does not matter how many crimes Joker has done, the law must be upheld. That includes Joker being acknowledged as not guilty when that’s the truth.

I am sucker for the kind of tales — See also: Daredevil’s defense of Mr. Hyde during the Kesel-Nord run on the title — that force heroes to confront their principles. To watch them struggle with whether to adhere to those principles even when it would be easier — and perhaps objectively better — to shelve them just this once.