HOUSE OF X #3 left us with a major cliffhanger. The X-Men arrived at the Forge to destroy the Mothermold before it could go online. When they got there, they sent Nightcrawler to locate the areas of attack within the station, unknowingly alerting those monitoring the Forge. With the advanced notice, they formed a plan of attack of their own. The moment the X-Men attempted to board the Forge en masse, it triggered a bomb that ripped a hole in the space station and seemingly destroyed the X-Men’s ship.

Then we had to wait a WHOLE WEEK for the next issue! Well fret not fellow readers, because HOUSE OF X #4 is here! Very exciting. At least,very exciting until the end. Don’t get me wrong it’s fantastic, but oh so dark. Anyway, let’s get into it already, shall we? 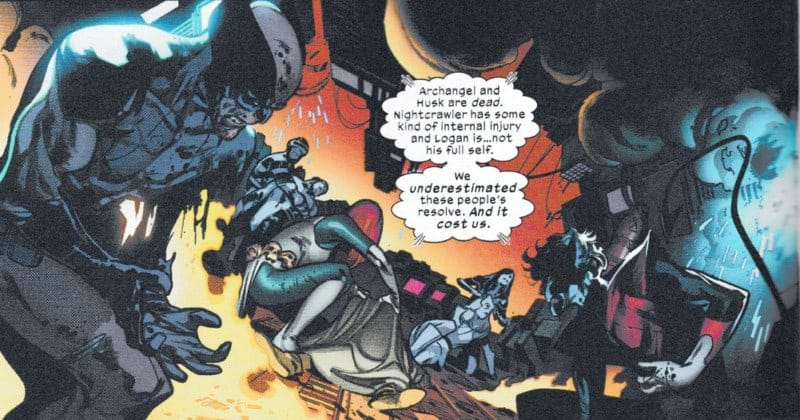 Right Back Into It in HOUSE OF X #4

HoX #4 picks up right where HoX #3 left us. The issue opens with Charles and Magneto checking on the progress of the mission through a telepathic link with the X-Men. What they find is not very promising. Jean reports the explosion and the resulting casualties. Cyclops, Nightcrawler, Wolverine, Mystique, Monet, and herself all survived, but ended up very much worse for the wear. Archangel and Husk, on the other hand, were not as lucky. The explosion killed them both right away. Even injured and mourning, however, the team recognizes this is perhaps the most important mission the X-Men have ever been tasked with.

Knowing the successful destruction of the Mothermold takes precedence over their lives, Cyclops decides — with Professor X in agreement — to press on. Nightcrawler teleports each surviving member of the X-Men to key locations while Jean and Monet stay on the ship to maintain the group’s psychic link. The plan is simple, release the four control collars and let the Mothermold drift into the Sun. The first three go by without issue. The fourth, however… 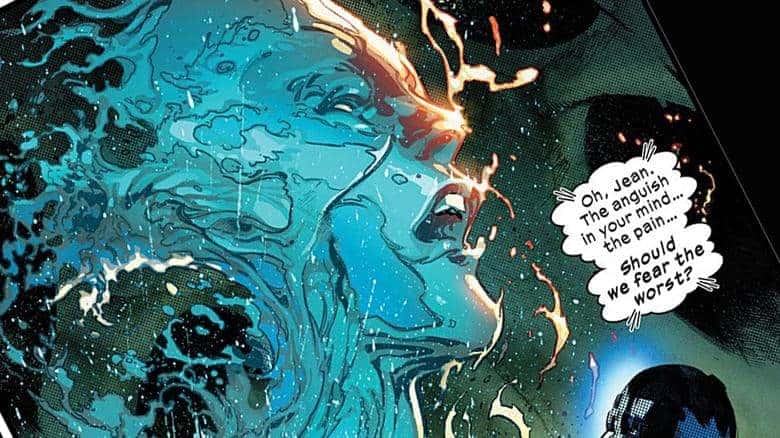 As Mystique approached her collar, she comes face to face with Karima and Dr. Gregor. As an Omega Sentinel and the chief science officer, respectively, the duo are the X-Men’s biggest obstacles on the Forge in H0X #4. Before Mystique can release the collar, Dr. Gregor opens an air duct, sucking a screaming Mystique out into space. Leaving the duct open effectively stops any other X-Men from making an attempt. And there are more hurdles to come.

The fight leaves the Forge when armed attackers invade the X-Men ship. Monet sends Jean out in an escape pod to maintain the lines of psychic communication. She stays behind to fight the humans and buy her teammates some time. Monet fights until the end, but her end does come.

With one collar to go, and no way to release it, Nightcrawler and Wolverine decide to teleport to the collar itself and manually release it. Nightcrawler dies almost immediately after teleportation, a victim of the vacuum of space. His death is not in vain, however, as Wolverine cuts the collar free and sent Mothermold hurtling into the Sun. The Cranky Canuck then follows the fuzzy blue elf off this moral coil. 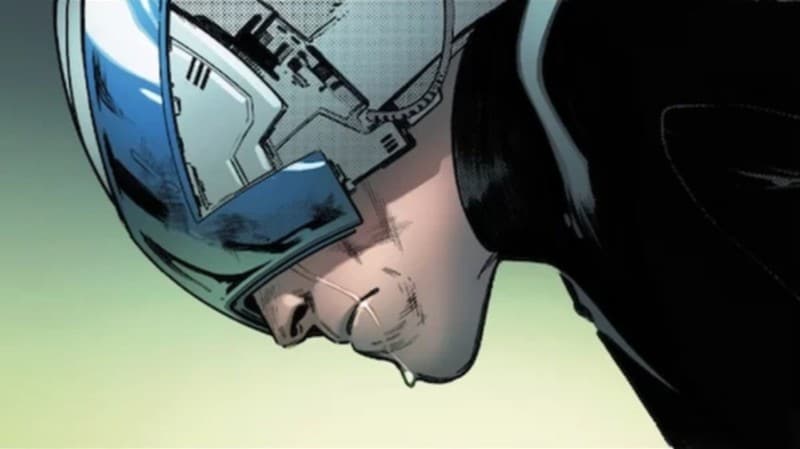 The Mothermold mission is complete. Technically, the goal has been achieved. However, as the dust settles, only Cyclops and Jean still draw breath. Alas, even this proves temporary.

In the immediate aftermath, Cyclops comes face to face with Karima and Dr. Gregor. Karima ambushes Cyclops with a laser that disables his mutant abilities. Dr. Gregor follows suit with a headshot that kills Slim.

Meanwhile, a Sentinel fleet arrives and engages Grey’s escape pod. Largely defenseless, Marvel Girl quickly meets her demise at their robotic hands. As the horror of it all dawns on Xavier, the Professor begins to cry. Cursing mutants’ treatment, he closes HoX #4 proclaiming, “no more.” 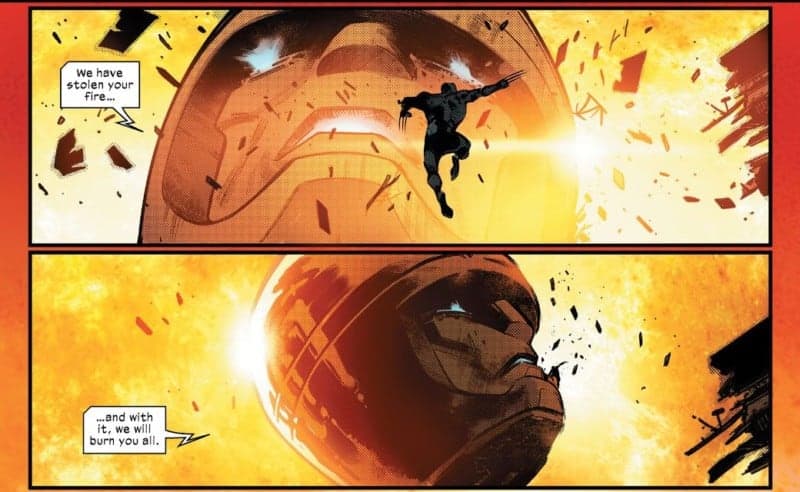 Wow heavy stuff right?! They are all dead, but hey at least they completed their mission before they died. Or did they?

It turns out, Dr. Gregor did succeed in bringing Mothermold online just as Wolverine severed the final control collar. It awakens, comparing humans to Greek Gods in their ability to create. It tracks, in the Mothermold’s “mind” then that Sentinels are like ancient Greeks, a direct creation of the Gods. Mutants, therefore, are Titans, the spoiled lineage of the Gods. Implicit in this comparison is the fate of both the Gods and the Titans, effectively killed —  both in the tales of mythology and as a system of belief — by humans. Mothermold’s final words, “Do you hear us Olympus? We have stolen your fire… and with it, we will burn you all,” seal this. HoX #4 is thus the moment humanity has created its own — and mutants’ — engine of destruction. 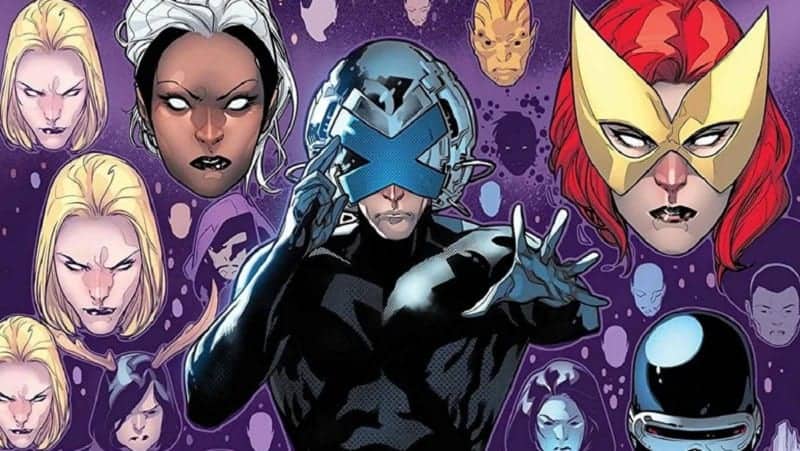 The stakes are incredibly high for our heroes and we will see the mutants like we never have before. These books have kept me on the edge of my seat and have kept me wanting more with each passing issue. The next issue after HoX #4 in this amazing saga is POWERS OF X #4. I cannot wait!