Comic-Con was a huge event for all kinds of fans this year. Hall H held some of the biggest news though, as Marvel launched the next phase of its cinematic universe. Loki and Hawkeye will be given their own respective TV series, Black Widow finally gets her own film, and the Eternals and Shang-Chi will grace the screen. Add in sequels to DR. STRANGE and CAPTAIN MARVEL, and it feels like nothing else could possibly be added….except LOVE AND THUNDER! 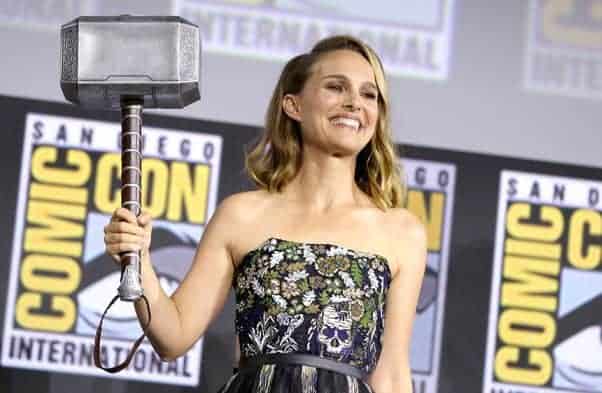 Yes, Natalie Portman will be returning to Marvel in THOR: LOVE AND THUNDER, and she will be bringing the Jane Foster version of Thor with her. The THOR films are a favorite for me (even DARK WORLD). I also felt The Mighty Thor (as Marvel refers to her) was a solid addition to Thor’s legacy. However, Marvel still needs to take care. Putting a new Thor on the screen raises a number of issues. These range from ‘how and why’ to the material that might be adapted. Marvel has a solid track record, but for LOVE AND THUNDER to work, there is plenty that needs to be addressed.

Statue Quo of LOVE AND THUNDER 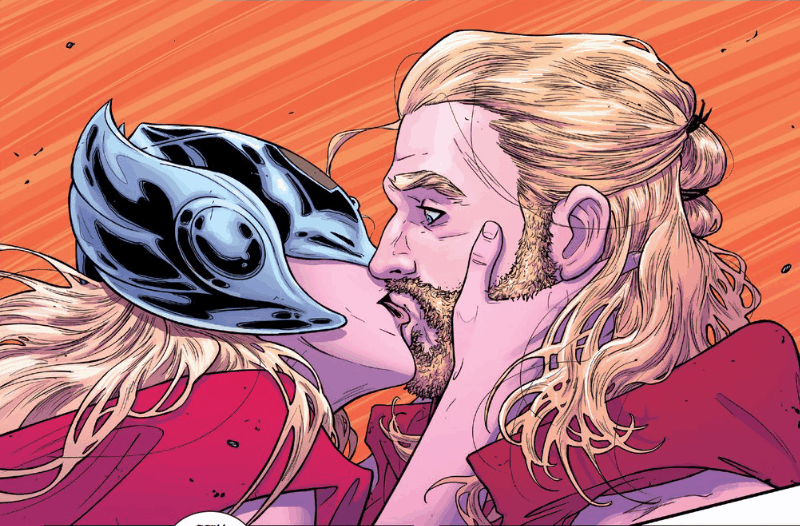 The most glaring concern a new Thor brings is what will happen to the old Thor. The comics addressed this issue by temporarily making Thor unworthy of Mjolnir, which left it free for Jane. However, the film version of Thor spent much of AVENGERS: ENDGAME overcoming depression, so that seems fairly unlikely here (especially with the lighter touch of returning THOR: RAGNAROK director Taika Waititi). So if unworthiness isn’t an option, what will two Thors be like?

Will these two Thors co-exist, as they did in the comics? Will this rekindle their romance? Or will Mighty Thor be earthbound, while the classic Thor continues traveling with the Guardians of the Galaxy? Or will the movie take a hard turn and actually kill the original Thor? That would leave the field open for Jane, but actor Chris Hemsworth has shown interest in more Marvel movies. Combined with Waititi’s style, that makes a death seem unlikely. And unlike the comics, Marvel can’t split these two into separate stories, so there needs to be a clear sense of how two gods of thunder will be swinging the hammer. And on the subject of hammers… 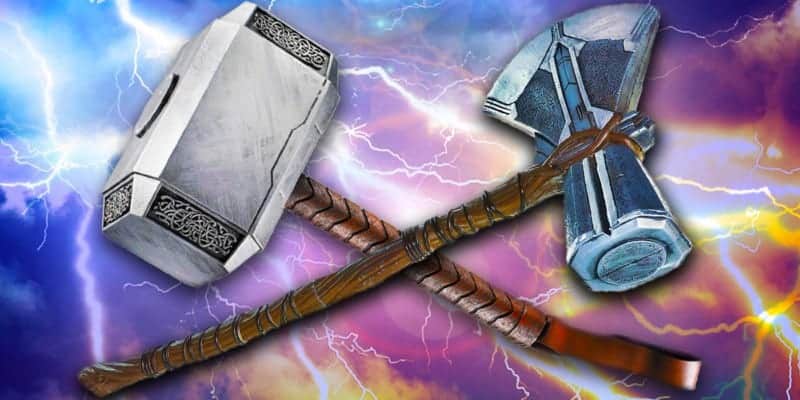 One of THOR: RAGNAROK’s greatest emotional blows is the breaking Thor’s hammer Mjolnir. The loss of Thor’s signature weapon was a blow to him, even though he received a new weapon, the hammer-axe Stormbreaker in AVENGERS: ENDGAME. However, the loss of the hammer is an issue for LOVE AND THUNDER as well. In the comics, Mjolnir functions as the conduit allowing to Thor exist on Earth when he was tied to a mortal spirit. As such, the hammer also allowed Jane to transform into Thor.

Without the hammer as a conduit, it’s unclear how Jane would harness the power of the thunder god. Stormbreaker has much of Mjolnir’s power, but since Thanos used it briefly in ENDGAME, it’s clearly not weighed by a person’s worthiness. So, if Stormbreaker can’t transfer the power of Thor (as far as we know), what other options are there? There may be ways to forge a new Mjolnir, such as the forge of Nidvhallir. However, another option might be to create a new weapon– the mace of Thunderstrike, a hero that was, in essence, another version of Thor.

This would both allow Jane to gain powers while also establishing a status quo for her and Thor. However, it could also make Jane seem like a lesser version of Thor, which is an image Marvel probably wouldn’t want to convey. Clearly, the studio needs to carefully use the comics history at their disposal to find a worthy answer. Speaking of which…

What To Use From The Comics 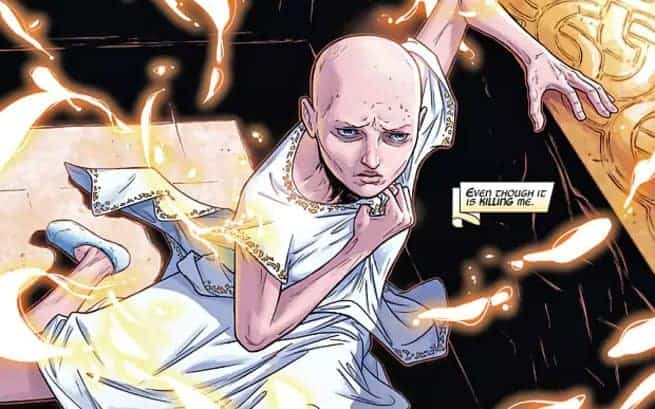 I felt Jason Aaron’s THE MIGHTY THOR was a solid entry for the THOR comics franchise, keeping a good mix of both classic and newer storytelling. At the same time, there is a tragic element to it as well. In the comics, Jane Foster is suffering from terminal cancer while she acts as Thor. Holding the hammer doesn’t heal her; in fact, transforming into Thor purges the radioactive chemo that battles the cancer.  That side-effect meant Jane’s time as Thor was always limited.

This poses an obvious problem for LOVE AND THUNDER. A story about Jane dying from being Thor would be extremely tragic, and would make the whole venture seem pointless. Her desire to help people despite her illness was noble and seemingly made her worthy of the hammer. The comic approach wouldn’t  really work here though. Those stories had several issues to draw it out and allow Jane time to be a hero while battling her illness. A film would have to condense that story, and the tragedy involved would undercut any sense of triumph.

Granted, Natalie Portman may signed for several movies (unknown as of this writing), so there could be a bigger stage to play this out. Still, it would be disheartening to know every appearance meant Jane was coming closer to death. Therefore, Marvel may want to find a different way to make Jane worthy of being Thor.

“If She Be Worthy” 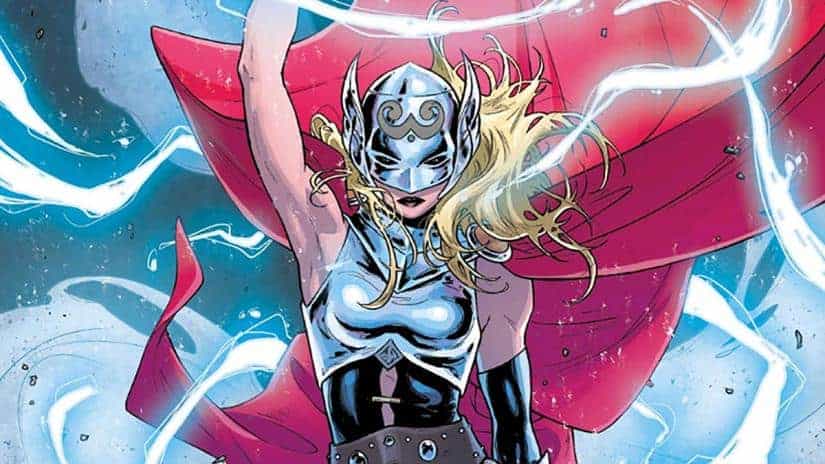 I’ve said already that I felt J.F. Thor was a solid book and good addition to THOR’s overall legacy. However, I’d be lying if I said I thought it was perfect. There was a single glaring question that always bothered me, no matter how good the book was:

“Why was Jane worthy?”

At the time, Thor’s loss of Mjolnir wasn’t fully explained (though a good answer was eventually given) and it felt like the writers were all too eager to place the hammer in Jane’s hands. Now, I realize that Jane’s desire to do good as Thor, even at the cost of her own life, is a noble desire. At the same time, it’s a DESIRE. The comics already established that Thor had to spend his youth doing noble deeds to even lift Mjolnir over his head. The only other people that could lift the hammer were established names with similar heroic deeds like Captain America, Beta Ray Bill, and Wonder Woman (look it up). Jane did a lot of good as a nurse, but it’s not at the level that commands godhood.

MCU Jane doesn’t even have that option because she was a physicist, not a nurse. Still, this does open up possibilities. LOVE AND THUNDER could be a journey story, with Jane having to work and earn the right to become Thor. It would make her transformation the climax of the film, and feel like a true hero’s journey. If Marvel wants her to be the new Thor, this would be a great way to do it.

Final Thoughts on LOVE AND THUNDER

I’ve always been happy to see THOR movies and I’m just as happy to see what LOVE AND THUNDER can be. Ideally, it’ll help establish a new Marvel heroine and continue the THOR story, while also being a fun ride. Marvel still has a lot to think over as how they can do this right, especially if they have more plans for Thor. For now, all we can do is wait and hope, but knowing Marvel, they already have answers to these questions, and they’ll probably be be good ones.

THOR: LOVE AND THUNDER is scheduled for release November of 2021.