MEN IN BLACK proved an unexpected delight upon its release in 1997. Five years later, MiB II sent the whole series crashing into the Earth and seemingly killed the alien monitors/hunters’ future. However, 10 years after that, MEN IN BLACK 3 revitalized the whole thing, just for no one to touch it. Until now, with MEN IN BLACK: INTERNATIONAL, seven years on.

Can INTERNATIONAL build on 3’s delayed momentum? Can it springboard off stars Chris Hemsworth and Tessa Thompson’s incredible THOR: RAGNAROK chemistry? Will be it take us to the stars? Settle for the moon? Or is this another asteroid sure to crater hard? (No more space puns, I promise.) 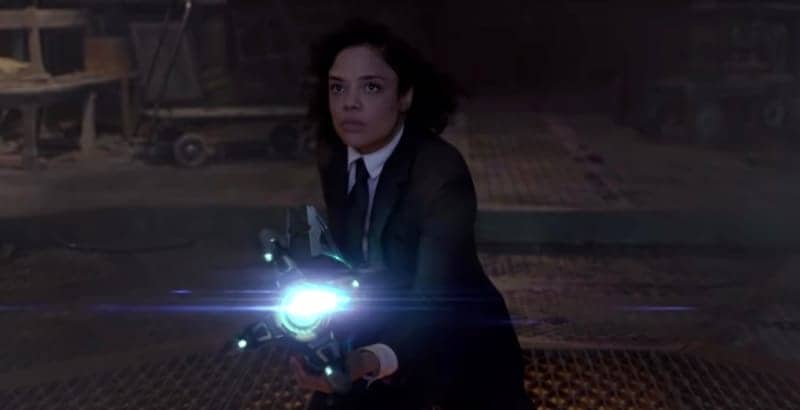 Tessa Thompson takes aim during a scene from MEN IN BLACK: INTERNATIONAL (Courtesy of Sony Pictures)

The Idea Behind MEN IN BLACK: INTERNATIONAL

A childhood incident in which Molly (Mandeiya Flory) meets and allows an alien to escape detection inspires a lifelong obsession. Now an adult, she tracks all kinds of objects moving through space, just waiting for her chance to piggyback on some illegal alien visitors to get access to the Men in Black. Sure enough, a bad alien dad tries to swing by for some unauthorized kid time and our protagonist is ready and waiting. An elevator ride, some tests, and a dressing down from Agent O (Emma Thompson) later, Molly is now Agent M (Tessa Thompson).

Before one can say “across the pond,” Agent M gets sent to Jolly Old England. There, world-saving Agent H (Chris Hemsworth) has been dining off his shining moment for some time now. Once seemingly the heir to High T’s (Liam Neeson) command, he now drinks, carouses, and generally recklessly stumbles about, surviving on his charisma and good looks. Only Agent C (Rafe Spall) seems unmoved by either the reputation or the roguish charm.

In search of a bigger role, M cozies up to H. As a result, she ends up swept up into a possible MiB mole hunt involving a dead royal alien, the most powerful weapon in the universe, and a parasitic alien invader known as the Hive. As a result, the duo encounters a tiny warrior Pawny (Kumail Nanjiani), Riza (Rebecca Ferguson) — an arms-dealing ex of H’s — and a multitude of other Agents gunning for their heads. 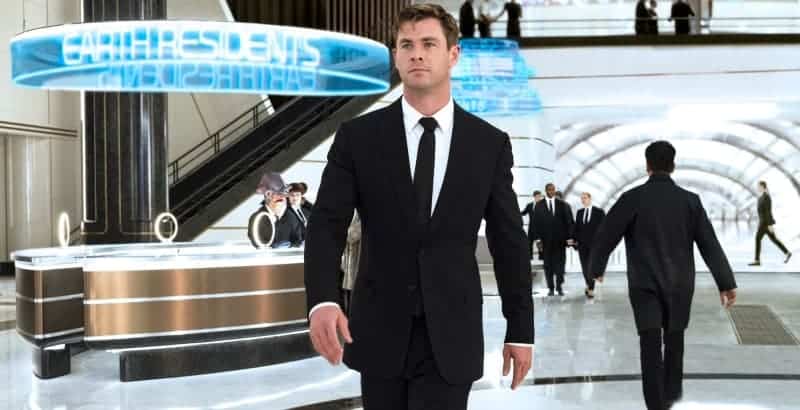 Chris Hemsworth struts it out for everyone during a moment in MEN IN BLACK: INTERNATIONAL. (Courtesy of Sony Pictures)

The writing team of Art Marcum and Matt Holloway have collaborated together since 2004. With the exception of their first feature, they almost always pair with other writers or add polish to someone else’s script or story. I mention this because MEN IN BLACK: INTERNATIONAL sees them flying solo for the first time since 2004 and their skills make them uniquely suited to writing the fourth movie in a franchise.

In practice, though, it feels like they get the mechanics of building a MiB script but not necessarily that little extra bit of magic. Plotwise, their script keeps things moving. They introduce new set pieces and encounter new characters with regularity, the beats apportioned at a good pace. The plot is understandable but not obvious. Traps set early spring on time and affect the plot.

However, the interactions do not sing. Often characters seem to be moving past each other, not connecting and interacting.

If there was ever such a thing as the opposite of “all sizzle, no steak,” it is this script. This thing is all steak, no sizzle. All structure, no play. All brains, no heart. 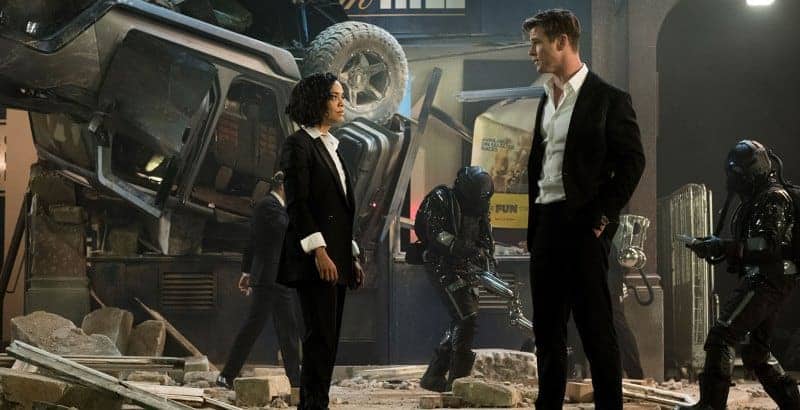 Tessa Thompson and Chris Hemsworth take stock of the damage during a scene in MEN IN BLACK: INTERNATIONAL. (Courtesy of Sony Pictures)

Casting the Leads of MEN IN BLACK INTERNATIONAL

This movie needs a fast-and-loose script that gives Hemsworth and Thompson tons of space to let their chemistry breathe and dance. As you might guess from above, they did not really get that.

This is not to say either one is bad. They’re both decent. But they also both feel halfway. Hemsworth’s H is supposed to feel reckless and unhinged. Given what we learn by the end, he should have a self-destructive edge a mile wide. Instead, he feels kinda… flippant. Like he takes things less seriously than he should when he should feel like he is a danger to himself and everyone around him. Again, he is working with what he has. The script is just not giving him what he needs to realize that character.

Similarly, M is made to be a loner who has spent her years living only for finding the MiB. She should be some mix of desperate and monkish. She says as much. However, beyond the one or two lines that outright declare it, there is nothing on the page for her to bring to life to show it.

Storywise, it seems the movie is promising two damaged agents who might just be too broken to save the world. However, Hemsworth and Thompson seem to only have been asked to make them “sort of quirky.” 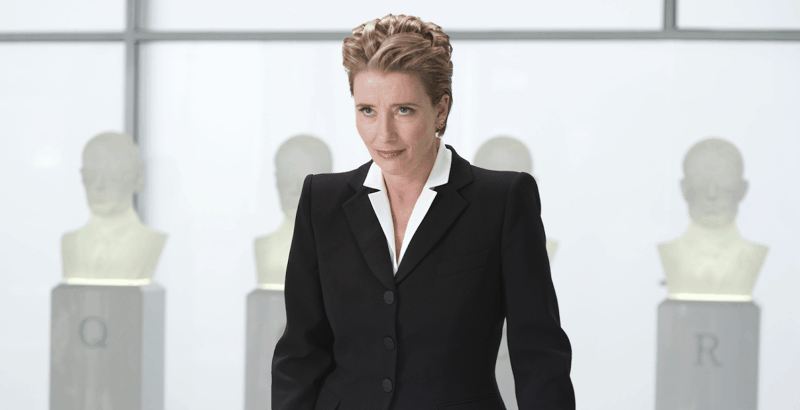 Emma Thompson stares down that alien scum in a scene from MEN IN BLACK: INTERNATIONAL. (Courtesy of Sony Pictures)

Casting the Rest of the Call Sheet

Nanjiani’s fully CGI character offers some chuckles. However, the movie often seems to forget him. There are a few lines when Pawny is not on camera that seem to be added long after the fact as though to say, “Oh, right. He’s still here.” So funny, but I wish they kept better track of him.

Neeson and Emma Thompson are both good as the heads of their respective branches of MiB, Thompson especially. Both, however, are also quite underused. Spall as the skeptical C, too, for that matter.

Actually, you might as well toss the whole supporting cast in that general category. From Rebecca Ferguson to the Les Twins and on down the line, most everyone feels good but underutilized. 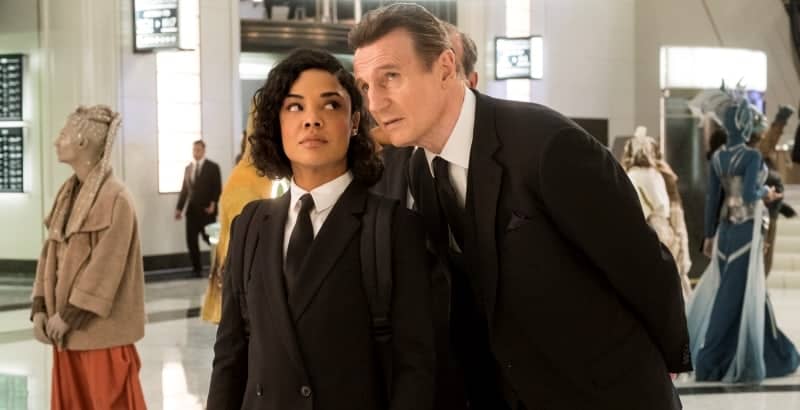 Tess Thompson wonders about what kind of conditioner Liam Neeson is using in MEN IN BLACK: INTERNATIONAL. (Courtesy of Sony Pictures)

Gary Gray is a good director of matinee fare. That is, the kinds of movies you see on a random afternoon that you find yourself surprised by how fun they are. Or the kind of movie on television that gets shown all the time but nonetheless sucks you in with that one scene or that key performance. In fact, he directed one of my personal favorite matinee flicks, THE NEGOTIATOR. It may not be high art but, goodness, do I love it.

So I had a mix of optimism and pessimism about him directing MEN IN BLACK: INTERNATIONAL. In retrospect, both were right.

He generally upgrades nicely, capturing the size and spectacle of MiB with little strain. On the other hand, a lot of the charm one can find in his earlier works is not present here. It does not feel assembly line exactly, but assembly line adjacent. You can tell someone put it together by hand, but you can also tell they never looked away from the directions for a moment. 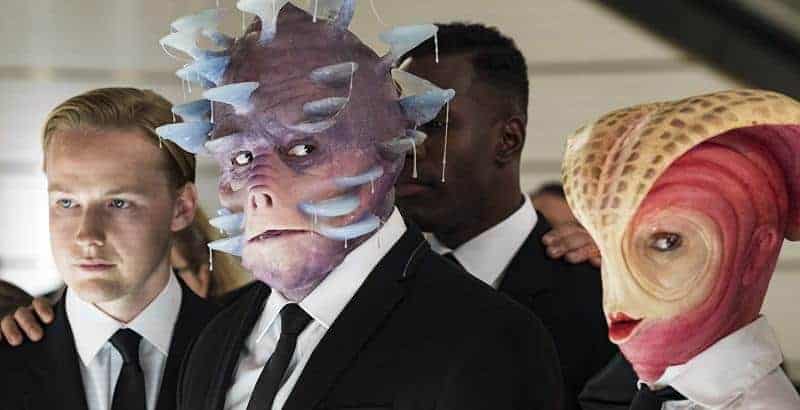 Some aliens in MEN IN BLACK: INTERNATIONAL take in the show. (Courtesy of Sony Pictures)

The Look of MEN IN BLACK: INTERNATIONAL

I think a lot of that feeling can be laid at the feet of the creature effects. The first MEN IN BLACK makes wonderful use of the practical and CGI effects to create a world with some heft. It is whimsical, but things have weight. You can feel the aliens as a part of the “real” world.

Here, that feeling is largely gone. The charm of the creatures in the physical has given way to slick design. Nothing feels cheesy, not at all, but nothing feels organic either. I am not one to bang my drum for the old school charms of bad claymation over good CGI, typically. Here, though, I really did miss that sense of reality. Nothing here is as scary as Vincent D’Onofrio’s herky-jerky work as the Bug. Nothing here is as delightful or eye-capturing as that first look at MiB headquarters populated by all means of actors as aliens in well-constructed makeup and prosthetics.

As was so often the case here, they got the motions right, but they forgot the charm. 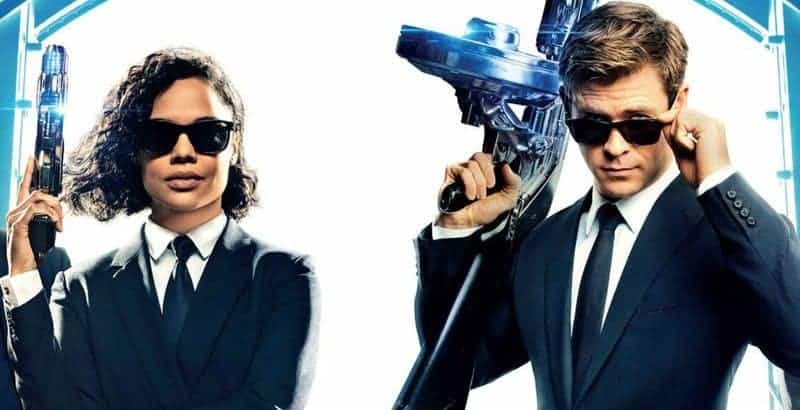 As I have said elsewhere, this is a decent movie. It does not feel too long, there are plenty of good performances, and the leads are undeniably charming. However, it does feel a little empty at its core. None of the whiz-bang delights of MiB can be felt in this sequel, nor the more contemplative downbeat sensibilities of MEN IN BLACK 3. This movie calls for them both. See it at 1:15 on a hot Sunday afternoon or on a Tuesday night when they have the five-dollar tickets. There’s no need to race out to see it right away.