Selina Kyle is a woman who will steal anything, including your heart. In the two-issue story arc, by Ram V and Miirka Andolfo, Selina Kyle steals more than just our hearts. An incriminating dossier is floating around and Catwoman is dying to get her hands on it. However, not everything is what it seems. CATWOMAN #15 closes out the two-issue story arc, and the ending is a banger!

Superheroing was lucky enough to catch a chance to ask Ram some questions about his work on the series. He tells us about working with Mirka Andolfo, writing detective stories, and what may (or may not) come in the future!

Superheroing: Can you tell us a little bit about the story in CATWOMAN #14 and #15?

Ram V (RV): To put it briefly, Selina finds herself in the middle of a bake off. Some of the best thieves/villains around are all aiming to steal a file that could sway the power balance in Villa Hermosa. But Catwoman will find out that the true prize is the one that’s been put on her head. So can she still come out on top and what does that mean for her place in this city that she now calls home?

Superheroing: The last CATWOMAN issue you worked on was a single, one-shot. What keeps bringing you back to the wonderful Catwoman?

RV: I just really like the character. Selina is an incredibly fun character to write. I think of her as the sort of person that thrives in chaos, and finds her centre in the eye of the storm. She always looks like she’s winging it but manages to land on her feet every time.  And despite all of that, there is an emotional core to her. Perhaps the sort of core where she doesn’t let too many people in. The contrast there is great material to write stories with. 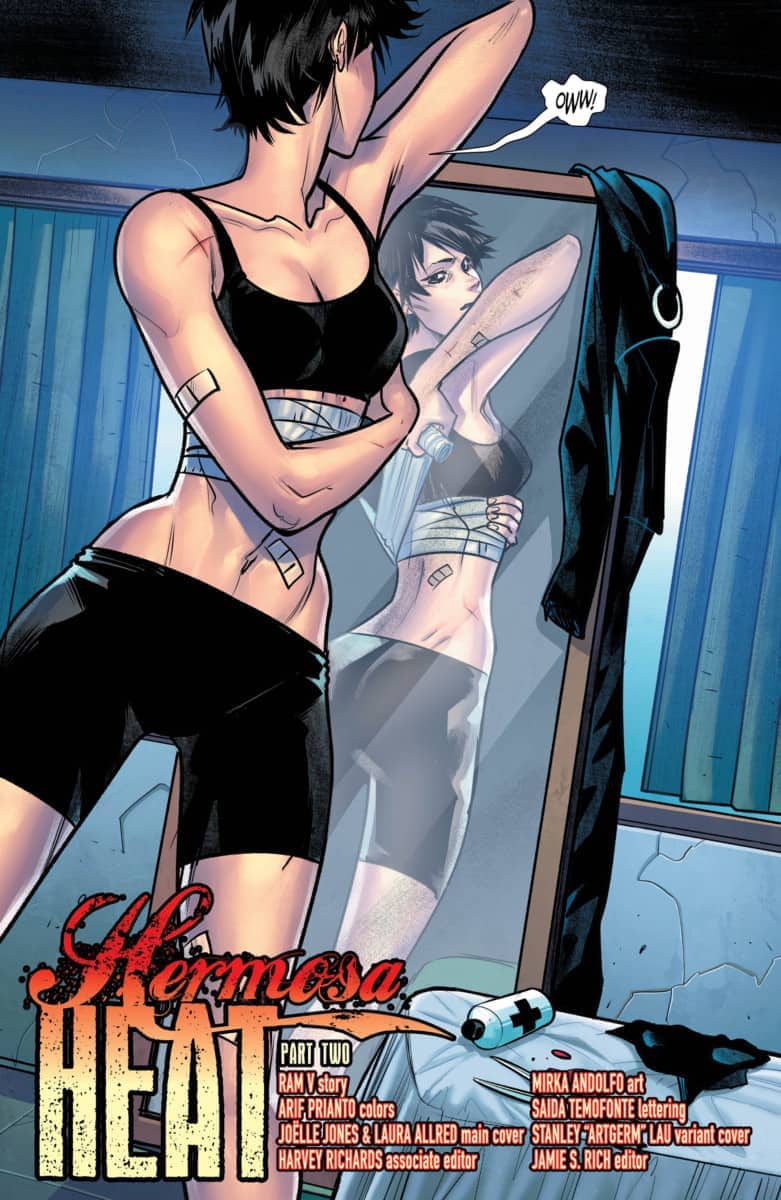 Superheroing: Detective comics seem complicated, forcing writers and artists to ensure that the evidence to a crime is present without making it overly obvious to the reader. What tips would you have for someone who wants to write an effective detective story?

RV: The shape of a detective story is important. More than anything else, the structure of how you tell the story, what you reveal to the readers and in what order is very important. You can take the simplest detective plot and spin it into an engrossing tale if you get the structure right. Sure it takes a little organization but effectively you’re pulling a sleight of hand trick. One that gets increasingly difficult to pull off as the story goes on because readers are always trying to get one step ahead. Find you out at your own game. So once I have the structure down, I think of it as a game I’m playing with the readers. How many times can I defy expectations within the story?

Superheroing: Gentleman Ghost is rarely seen. What did you think of him before this story? Why does he make sense for this story arc?

RV: I just wanted a fun supporting character to write, since I knew Selina was going to have moments of sustained action and intrigue. I wanted someone who occupies that same space as Selina does — somewhere between endearing and villainous. When my editor came to me with the brief I knew I had to pick a few characters from a gallery of rogues. And I knew I wanted one of them to be a little over the top.

I did a little bit of research and Gentleman Ghost just fit. I knew I wasn’t going to play him as a straight up villain — he is a gentleman after all. The voice, the slightly absurd nature of his history and the fact that he is a ghost, all fit in with what I wanted to do. He does become pivotal toward the end, but we’ll leave that for the readers to discover!

Superheroing: With characters that have defined history, you (usually) have to work within a template of the character. What do you find the most difficult when working with a character that has a strong history like Catwoman or Gentleman Ghost?

RV: To be perfectly honest, there’s only so much attention you can pay to that. These characters have their histories because writers, artists, and creators made them their own. They gave these characters their histories and their personalities. You want to be mindful of it, perhaps even nod to it within your work. But it is important to remember that you must bring yourself to every character as a writer. Writing to a template is boring. Of course her history influences how I write Selina but given the room, I’d write her so that my stories form a part of her history — i.e. they change her, develop her, evolve her as a character. Ultimately you want your stories to be meaningful and have consequences for the character. You can’t do that if you’re paying too much attention to history. 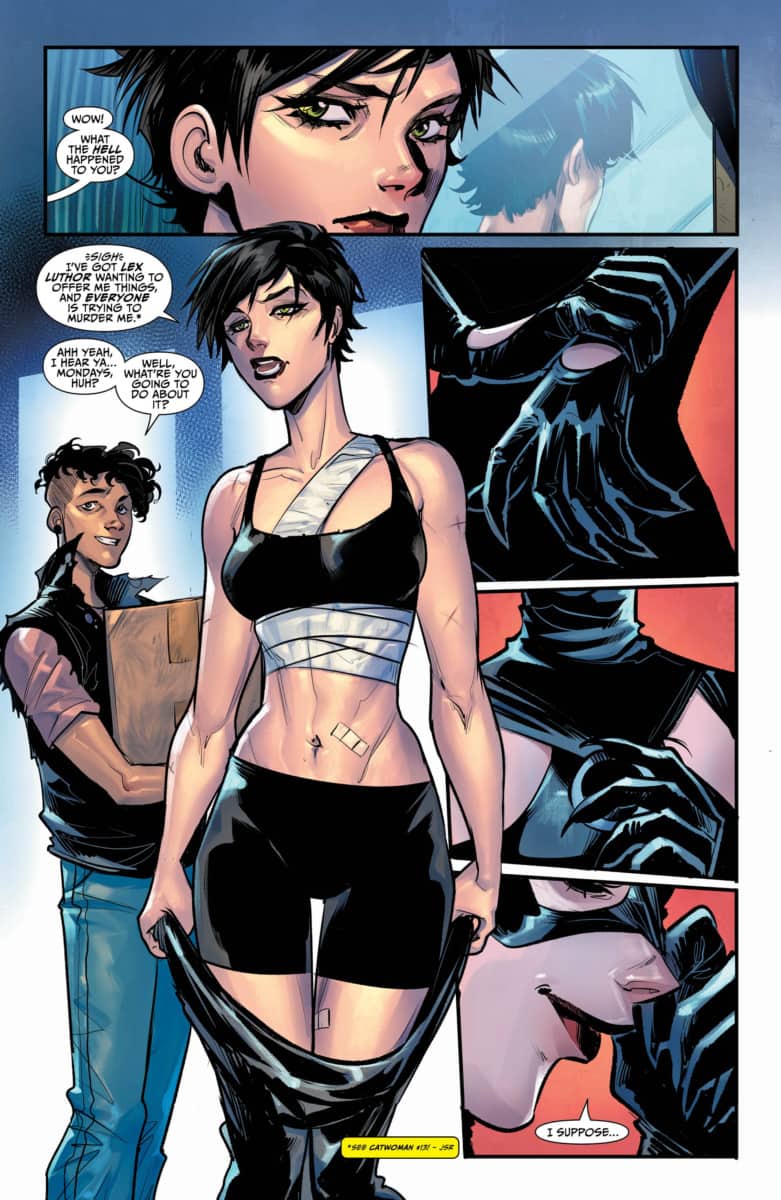 Superheroing: Mirka Andolfo is a remarkable artist. I love their work, and have been following UNNATURAL since the series started. How did you two meet? What’s it like working with them?

RV: Mirka is amazing. I first ran into her at a convention probably a year or so before we worked on this story. I’d seen her work on UNNATURAL as well and when Jamie (my editor) mentioned she was doing the art for this, I knew she’d bring that same energy, dynamism and expressive art to Catwoman. She brings both vulnerability and strength to her art when depicting Selina. I love that.

RV: Clayface. Of course, Clayface. I’m in love with characters who can take on appearances and identities. I find them fascinating.

Superheroing: You’re a highly productive person. Your twitter is always lighting up with new projects. Is there anything in the works you want readers to keep their eyes open for?

RV: My productivity is starting to come back to bite me, a little. I seem to have taken on a LOT and I panic a little every time I see a work email. So posting progress on twitter has become a method of comforting myself in the madness. All of the projects are early stages. They’ve been picked up and have artists attached but nothing I can talk about in an official capacity. I have projects underway with Anand Radhakrishnan, Evan Cagle, and Sumit Kumar on the creator owned front. All of them I am very excited about but you’ll have to keep an eye out on my social feeds to get official announcements on those.

At DC, I’m in a scheming and plotting stage. So when those plans are hatched, I’ll be super excited to share them! Watch this space.

If you haven’t caught up with this arc CATWOMAN now is your chance! Just click here to purchase your digital copy today!