If there’s one thing that never fails to make me smile, it’s a well-written, well-thought-out, and truly genuine comic book romance. Clark Kent and Lois Lane have been a staple of comic book romance for years. Luke Cage and Jessica Jones are a badass couple. Hell, Image Comics even has a good one with Marko and Alana in SAGA. But if there’s one comic book couple I adore more than all the others, it’s Spider-Man and MJ.

Peter Parker and Mary Jane Watson are perhaps Marvel’s top romantic couple. Other than Reed Richards and Sue Storm, I can think of no other couple more famous in Marvel’s long history than this one. Spider-Man and MJ have been nearly inseparable since they first met. Sure, it took a while for them to actually get together, but even before they were an item, they were the best of friends.

Spider-Man and MJ had one of the longest-running comic book marriages. That is, until the mid-2000s, when a little story called “One More Day” came along and destroyed it. But, not to worry, friends. Not too long ago, writer Nick Spencer took up the writing duties for AMAZING SPIDER-MAN, and what was the first thing he did? He got Spider-Man and MJ back together.

So, in honor of their reunion (and, since it’s timely, Valentine’s Day), I’ve decided to chat about how awesome it is to have Spider-Man and MJ back together. I’m also in the mood to reminisce on some awesome Spidey/MJ moments, so I hope you’ll stick around for all that fun stuff, too.

AMAZING SPIDER-MAN (2018) #1 was an absolute hit. Written by Nick Spencer, and with art from the absurdly talented Ryan Ottley (INVINCIBLE), this issue proved that Spencer was on a mission to fix many of the problems Spider-Man had been facing in recent years, in terms of storytelling and characterization.

Since then, Spencer’s been on a hot streak, writing truly unconventional Spidey stories and making the character feel fresh again. There are many subtle nuances to his style, but what most immediately grabbed my (and I’m sure everyone else’s) attention was this page right here. 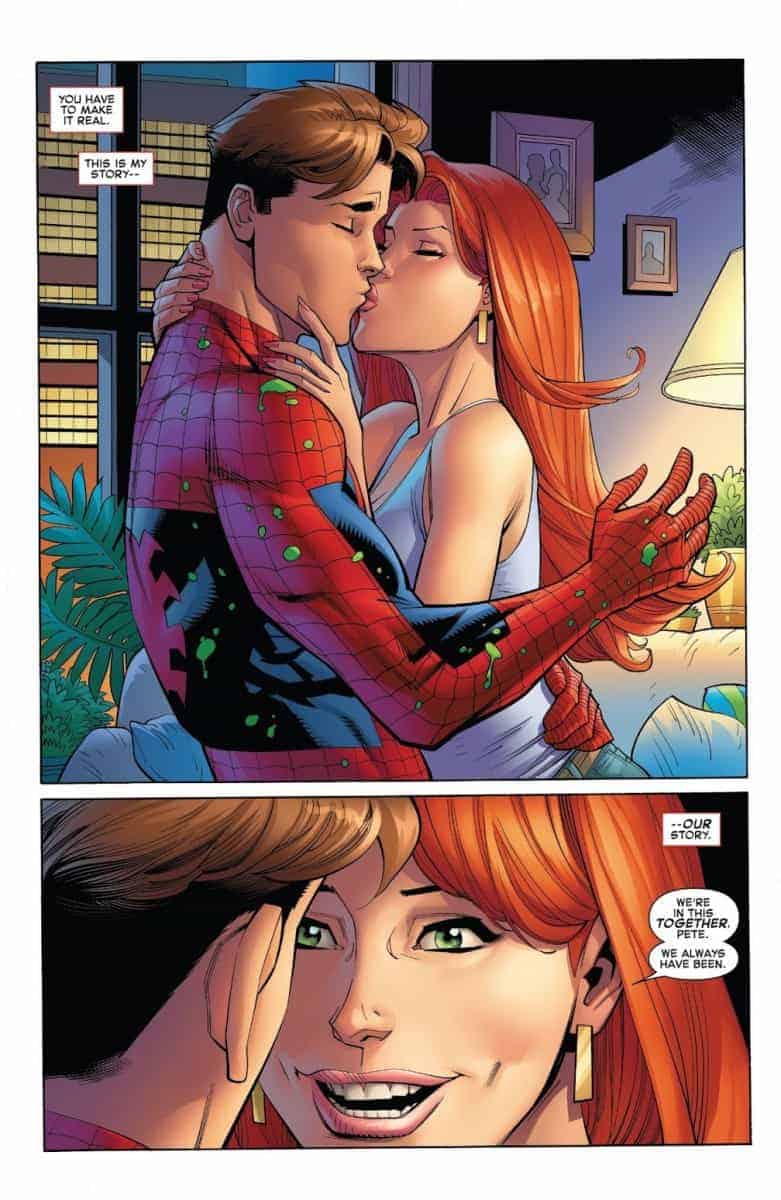 With Spider-Man and MJ finally back together, Peter Parker’s world feels a little bit more whole than it has in a long while. Already, things feel like they used to before Mephisto came and screwed everything up. We see Pete and MJ out on a date, only for Spidey antics to come calling. In several brief yet powerful moments, we see them supporting each other and really connecting again.

During Spencer’s second arc, we read a side story completely focused on MJ. She meets with a sort of anonymous-style group called the Lookouts. It’s filled with people who, in one way or another, are involved or connected to a superhero. She goes to a session and gets to openly, and confidentially, express much of her trepidation towards her relationship with Peter. But, in doing this, she comes out of this even stronger and more confident than before.

All of this remarkable storytelling with MJ has worked in beautiful conjunction with what Spencer is doing with Spidey himself. Having Spider-Man and MJ back together at long last feels right. It’s a much-needed return to form for both of these characters.

Why Spider-Man and MJ Work So Well Together

Nick Spencer reuniting Spider-Man and MJ is a testament to how perfect these two characters are together. There’s a reason you couldn’t split these two apart. They’d always bring out the best in each other. They’ve always had a fierce commitment to each other, and through all of their struggles and trials, they’ve always come out stronger than before.

For example, AMAZING SPIDER-MAN #122 features some of the best progression for Spider-Man and MJ as a not just a couple, but also as best friends. Peter is so distraught and blinded by his pain that he completely shuts MJ down as she tries to comfort him. But rather than take this as a brutal offense, MJ stays by Pete’s side. This was a wake-up call for MJ; it’s when she started evolving from being the pretty party girl to being a mature and responsible person, someone who Peter could truly count on. This was the moment a romance between Spider-Man and MJ went from being a fantasy to being a real possibility. 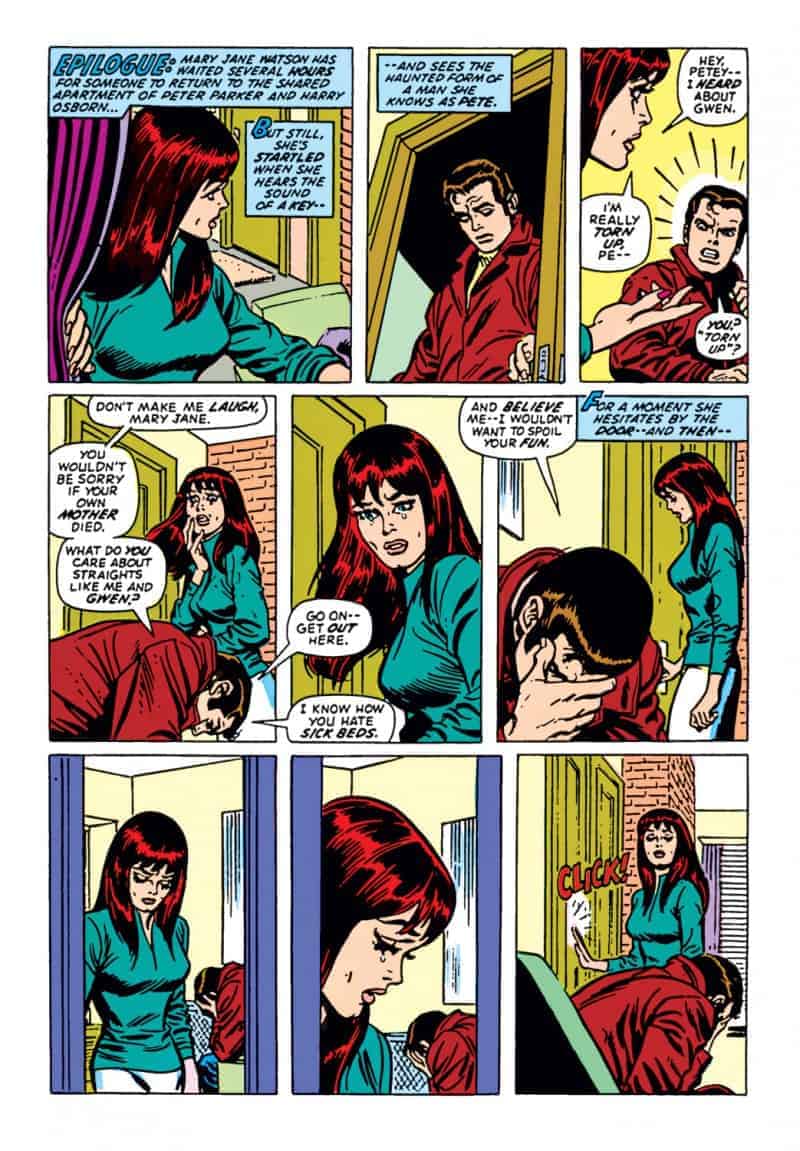 Nowadays, Peter frequently mentions how he and MJ are best friends and always have each other’s backs. That’s because it’s so damn true. It’s always been true, especially when they were properly together. Though time and countless Spider-related antics have tested their bond, nothing could truly break them. Even as the impending end of their marriage loomed at the end of the “One More Day” arc, Spider-Man and MJ knew they would always stand strong together.

They Never Should Have Been Split Up in the First Place

Speaking of “One More Day,” we should probably take a quick moment to address this.

“One More Day” was the straw that unfortunately broke the camel’s back. It was a story that shouldn’t have happened, and it did only because Joe Quesada wasn’t a fan of Spider-Man being married. In order to save Aunt May and make his identity a secret once again, Peter and MJ trade their marriage to the devil Mephisto. If this sounds like a bad idea on more than one level, that’s because it is. This controversial story has earned an egregious amount of backlash from fans over the years.

Now, on the upside of things, if it weren’t for “One More Day,” many of the great Spidey stories we’ve had in recent years wouldn’t have been possible. Likewise, Nick Spencer wouldn’t have been able to grace us with Pete and MJ’s heartfelt reunion. But such a reunion shouldn’t have been necessary in the first place. There was no sensible reason to take away Peter and Mary Jane’s relationship. If anything, there could have been a better way to allow these two characters to move on, if only for a time until they could be reunited.

I’ll say this much, though: I don’t think “One More Day” is, on the surface, a bad story. It showcases much of what I love about Spider-Man and MJ as a couple. Their unwavering dedication to each other, their willingness to sacrifice themselves for each other, all the great aspects of their relationship shine through this brooding story. So, as much as most Spider-Fans hate it, you do have to give “One More Day” some credit for the things it got right, and the path it led Spidey and MJ down.

The Best of Spider-Man and MJ

There’s a ton of great Spidey/MJ moments, so I’m going to rattle off a few of my favorites. It goes without saying Peter and MJ’s first meeting is on my list. Don’t worry, I haven’t forgotten about that.

Published back in 1987, AMAZING SPIDER-MAN ANNUAL #21 finally saw Spider-Man and MJ get married. Written by Jim Shooter and David Michelinie, with art by Paul Ryan, this is a quintessential Spidey comic, as we see the touching moments leading up to a truly romantic occasion. 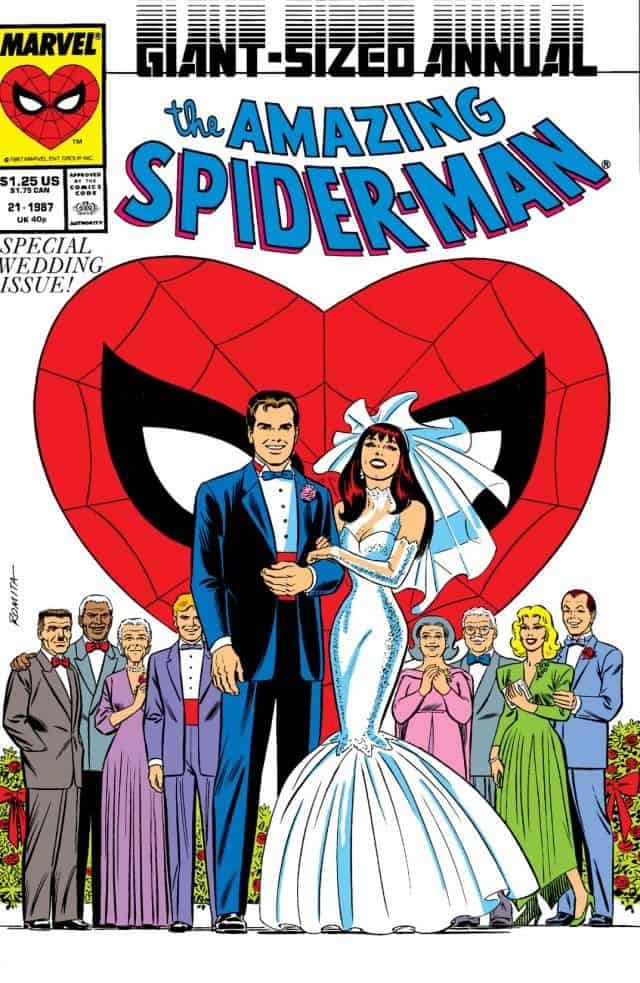 Although SPIDER-MAN: BLUE is more of a Spider-Man/Gwen Stacy story, there’s still a plethora of material revolving around Spider-Man and MJ. Peter revisits his formative days as Spider-Man, and how he could hardly choose between loving MJ or Gwen. The ending is sincere and heart-warming, believe me.

A few years after “One More Day” ended, Joe Quesada returned to AMAZING SPIDER-MAN with “One Moment in Time.” This story features Peter and MJ reconciling their grief and problems in a post-OMD world. It’s a great experience to read them overcoming the whole situation. As a result, both characters grow stronger and keep moving forward.

AMAZING SPIDER-MAN (1999) #50 is one of J. Michael Straczynski’s standout issues. Amidst some explosive turmoil in an airport, Spider-Man and MJ, who just reunited after a stint of separation, take time away from the action to just talk. They work through all their recent problems and realize just how much they need each other. Like “One Moment in Time,” they learn to move forward and come out the other side of all the drama even stronger. Only difference is they were still married at this point. 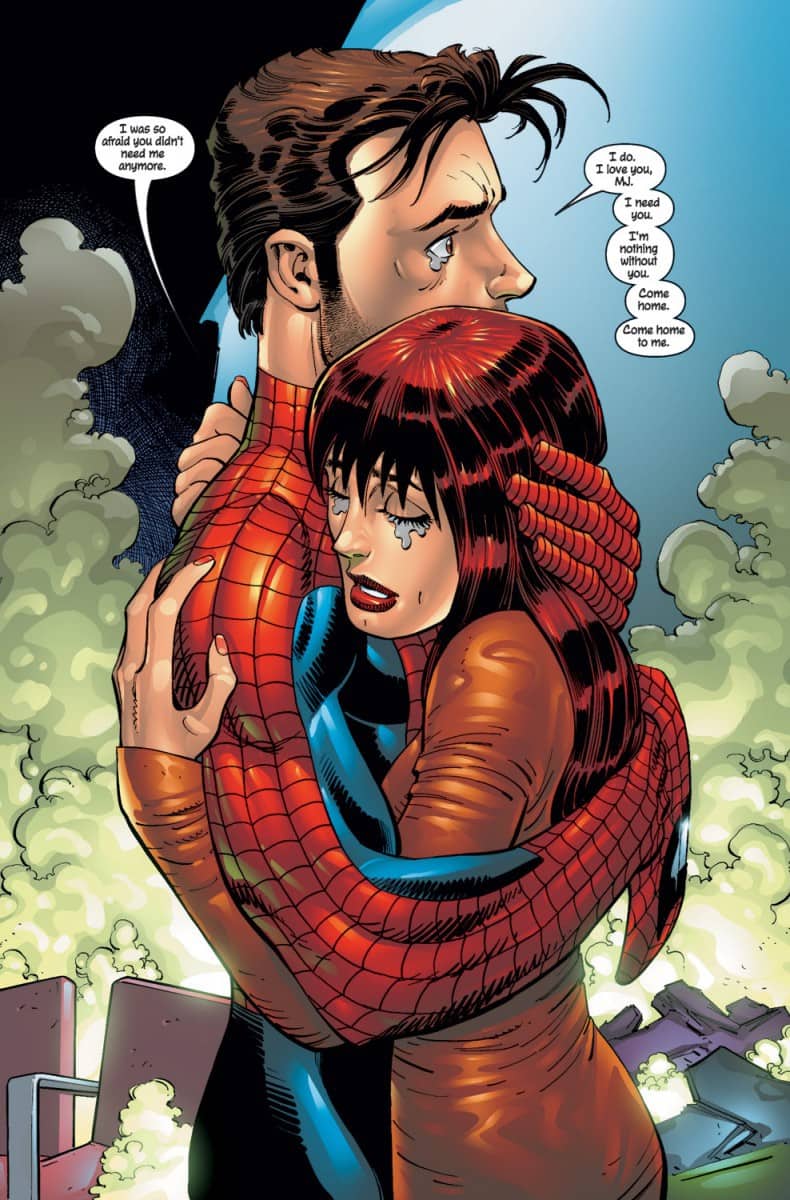 Spider-Man and MJ Outside the Comics

But, hey, if the comics aren’t presently tickling your fancy, don’t forget, Spider-Man and MJ have spent quite a bit of time together outside the comics.

Nick Spencer wasn’t the only one to recently reunite Spider-Man and MJ, by the way. SPIDER-MAN PS4 also did an excellent job of getting these two characters back together, though under very different circumstances. This reinterpretation of the couple excels because, like much of the game, it separates itself from the comics and does its own thing. This is a Spider-Man and MJ relationship for a modern, and probably younger, audience. I found myself immediately hooked on their arc together through the course of the game. You feel for Pete, as he’s trying desperately to get back together with MJ. But you also understand MJ’s hesitation and frustration. The game juggles their relationship extraordinarily well.

Sam Raimi’s SPIDER-MAN film trilogy did a fine job bringing Spider-Man and MJ together on the big screen. Aside from SPIDER-MAN 3, I’m a fan of Kirsten Dunst and Tobey Maguire’s chemistry. Their relationship is purposefully quirky, awkward, and uneasy. SPIDER-MAN 2 is largely in part about that. What few romantic moments they have together are genuinely touching. Plus, I mean, come on, who could forget the upside-down kiss? It’s an iconic superhero movie moment. 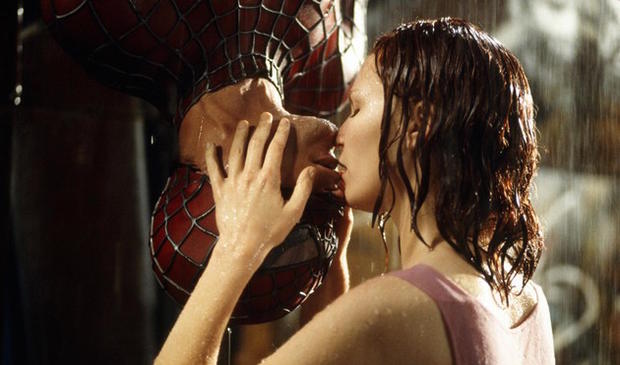 And let’s not forget that Spider-Man and MJ were briefly seen together in the recent INTO THE SPIDER-VERSE film. Their romance is essentially in shambles, mind you, but the tragedy of Peter and MJ’s relationship is one of the film’s most powerful aspects. It practically defines the film’s version of Peter Parker.

A Bright Future Ahead for Spider-Man and MJ

Spider-Man and MJ have quite the history together. We’ve come a long way from their fateful meeting all those years ago. Now, they truly are inseparable. I think it’s safe to say they both hit the jackpot. Get it?!

My crummy puns aside, what’s not to love about these two? In their formative years as a couple, MJ was a very different character. In the past two decades, she’s grown beyond the simple label of being Peter Parker’s girlfriend. Other than Spidey himself, MJ is one of the strongest characters in Spider-Man comics.

Peter Parker’s relationship with MJ is a defining factor of his character. He just isn’t the same without her. Fans have been saying it for years since “One More Day.” Thank God Nick Spencer came along and had the decency to listen.

The same guy who made Captain America say “Hail Hydra” is the same guy who’s completely reevaluating Spider-Man. That’s pretty awesome (and kind of funny) if you ask me. Nick Spencer has reignited a romance that’s been long overdue for a revival. He brought Spider-Man and MJ back together, on top of all his other fantastic work with the wall-crawler.

Spider-Man and MJ once stood together as one of the greatest, longest-running comic book couples of all time. A single story took all of that away. Now, Nick Spencer is giving them another shot. I have nothing but the highest faith that he’ll do right by these two.

So, basically, thanks for getting Spider-Man and MJ back together, Nick Spencer. We Spider-Fans owe you.