Late last week, people began to lay their eyes on SUPERMAN 100-PAGE GIANT #7, the latest volume of Wal-Mart-only books from DC Entertainment. Shortly thereafter, readers discovered the lead story featured twelve pages of Superman imagining why Lois Lane didn’t answer the phone when he called her. Everything he imagines involves her violent death.

Many people, I’d argue unsurprisingly, found this story to be unpleasant and, more importantly, tone-deaf; possibly perpetuating comics’ history of the violent mistreatment of women. Since the debate unfolded on the internet, others pushed back. They insisted that the violence was no big deal, comics are violent, people being upset were overly sensitive, and so on.

DC, being DC, has yet to respond. However, Tom King, the writer behind the twelve-page story, issued a statement Tuesday. He explained that the story intended to reflect the experience of being anxious about a loved one’s well-being. “To me this is a metaphor for the best parts of love. Love comes with stress, agony, risk, vulnerability, and we shouldn’t deny that stress, agony, risk, and vulnerability,” King explained, adding, “This story is not about the deaths of Lois Lane or the anxieties of Superman; it is about the love of Lois Lane and the love of Superman, the enduring strength of these amazing, iconic characters.”

Since I’m something of a coward, I’m not here to pass judgment on the debate, to name the right and wrong side. However, I do have thoughts. 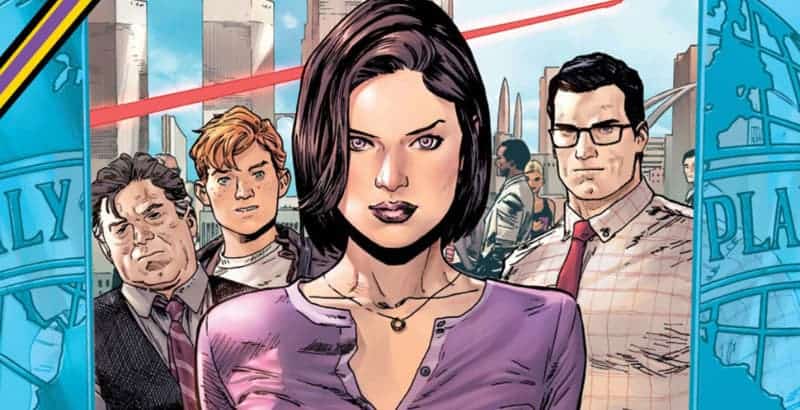 Fans are used to this vision of Lois, in control and leading the pack. To reduce her to on her knees needing to beg for her life doesn’t sit well with them. Image courtesy of DC Entertainment.

How Did They Not Anticipate People’s Feelings Towards Lois Lane?

As I’ve mentioned previously, I can be something of a monster about PR problems because I immediately jump to “why did they handle this so badly?” For me, when the mistake is bad, the failure to respond to the mistake with empathy is always worse. Especially with a story like this where you, as a company, should anticipate some backlash.

It baffles me, to be honest. How did no one involved in the creation of this book pause to say: “Hey, we all know people might not like seeing one of our top three most recognizable women characters killed on-panel over and over again, right?” Not even, “I don’t think we just do this,” just, “we should be ready for fallout here.”

The fact is, art can be controversial, even — maybe especially — art for commerce. I’m not wholesale arguing against doing things that people might not like. I’m saying that people and companies should recognize when they’re about to do something that might upset or hurt others and be ready to explain themselves. DC’s lack of response and King’s statement suggest that they didn’t see this coming and, even now, cannot understand why people might find the story objectionable.

Again, for me, it’s not about realizing they were wrong. It’s about recognizing how their actions are affecting others and being ready to, if not make amends, at least have an empathetic way to respond.

Are There Other Ways to Depict Anxiety?

The foundation of King’s argument was that the story reflects a human experience. Who amongst us, he more or less said, hasn’t called someone, failed to get a response, and began to imagine terrible things happening to them?

King isn’t wrong that this is an experience that, while not universal, plenty of people probably share. So, on this count, he has a point. However, it doesn’t necessarily follow that just because people experience this kind of anxiety it should be depicted quite this way on the page.

There are, in fact, many ways to convey Superman’s anxiety that don’t involve multiple depictions of his wife dying horrible ways. However, I try to critique the comic we got, not the comic that we could have got.

By that criteria, multiple deaths being shown as they are in this story diminish the storytelling power, not increase it. It emphasizes what we are seeing as anxiety fantasy, thus diminishing the drama of it. By putting us into Superman’s fantasies rather than his emotions, we feel removed from his anxiety. We know what he worries about, but we have no understanding for how it feels to him, what it makes him do or want to do.

Thus, if the purpose was to help us understand what anxiety is like for the Man of Steel, this story fails. And if it fails by emphasizing the violence, it doesn’t seem worth it, does it? 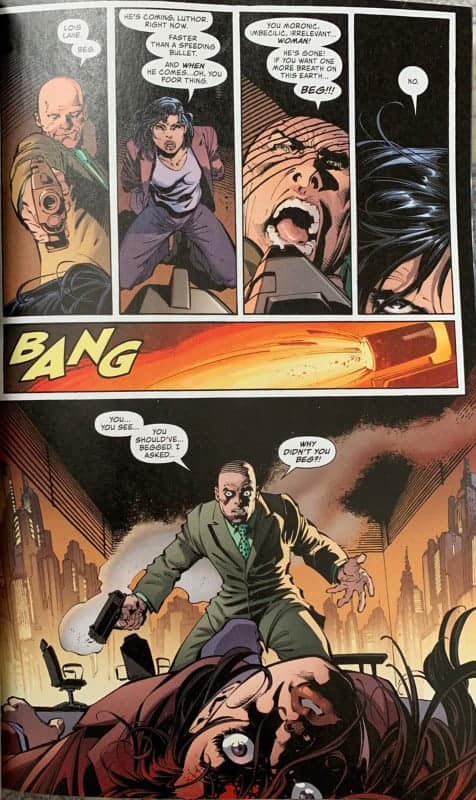 In the most controversial page in SUPERMAN 100-PAGE GIANT #7, Lex Luthor demands Lois beg for her life before shooting her in the head when she refuses. Image courtesy of DC Entertainment.

The other reaction I had to this was sparked, as you might imagine, by the comments. There are almost certainly some people who see no problem with King’s approach to storytelling who also have no issue with diversity of race, ethnicity, religion, or sexual identity in comics. However, there also almost certainly some people who have no problem with Lois’ multiple deaths who object with great fervor and volume to diversity in comics.

This one is less baffling to me and more galling. My capacity to accept and process violence is, I think, fairly high. Therefore, I rarely object, on my own, to violence in comics. However, if you gave me a survey and asked me to rank which are most objectionable to least objectionable, you better believe I’d find violence more objectionable than having same-sex couples kiss, letting people of color comment on the oppression of their people while in costume, or depicting Muslims as superheroic. That we as comic fans can handwave violence with such ease while going to war over the idea of a black girl being an Iron Man-inspired superhero in her own right is sad, disturbing commentary indeed.

To be clear, neither DC nor Tom King is responsible for this reaction. However, it does connect with above. If DC was rolling out, say, a bisexual male superhero, I guarantee they’d be ready to respond to objections and pushback. The repeated violent deaths of Lois Lane though? No one such plan. 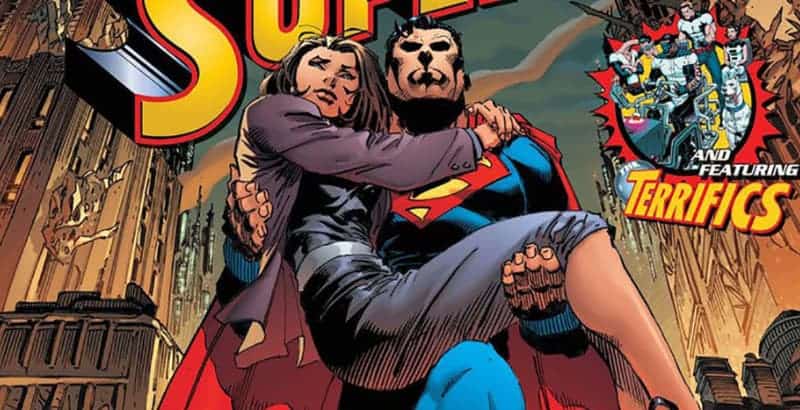 A segment of the cover of the controversial Wal-Mart book, SUPERMAN 100-PAGE GIANT #7. Image courtesy of DC Entertainment.

The 100-PAGE GIANTS aren’t, strictly speaking, All-Ages identified. Nowhere on their cover does a logo scream “POW! BAM! BANG! These comics are for kids!”

That said, they exist to be gateways to comics for people who might be interested but don’t go to the comic book store or Comixology regularly. They should, therefore, be calculated to reach the largest possible audience, yes?

I mean, that does make a sort of logical sense. However, comic books have long had a strange understanding of “All-Ages,” as has — for that matter — comic book fans. Think about the first time you read THE DARK KNIGHT RETURNS or WATCHMEN. Was it age-appropriate for you when you did so or were you fighting above your weight class? I suspect for most of us it’s the latter.

Of course, we were the ones making that choice. It wasn’t as though DC only stocked comic book stores with those two and a range of Vertigo titles. Sure, comic book stores are filled with a wide variety of books that can satisfy people young and adult while also being age appropriate. However, when it comes to Wal-Mart, it’s the 100-PAGE GIANT or nothing at all.

Once more, DC isn’t wrong here per se but, as a business decision, it seems like an odd one. Do you really want to make your big cut at growing your audience a twelve-page tale of Lois Lane’s repeated, oft-gruesome, death? Does that fulfill that mission?

Before #7, the last time Tom King wrote Lois Lane one of the scenes came in for criticism due to allegedly overly sexualizing her. This has likely complicated the current matter. Image courtesy of DC Entertainment.

There’s A Difference Between Criticism and Pitchforks and Torches

One of the reasons that both fans and creators pushback against criticism comes from the feeling of being under attack. To be fair, sometimes they are. Ask Nick Spencer during the Hydra-Cap era or Dan Slott at random times throughout his run on SPIDER-MAN. Heck, reach all the way back to Ron Marz and the H.E.A.T. years. Fans do cross the line. They have harassed and, sadly, they have issued death threats.

That’s unfortunate and that’s wrong. However, it ignores a whole range of negative criticism that comes before ceaseless annoyance or threat. If we want comics to recognized as legitimate art, informed criticism has to be part of that deal.

Whether you think the violence depicted against Lois is abhorrent or totally fine, the fact is that criticizing isn’t only acceptable but — in my opinion — for the good of comics. Look back at, for instance, Mark Gruenwald’s work on CAPTAIN AMERICA. At the time, Gruenwald created a new character he intended to call Bucky, the newest sidekick to bear the name. However, the character was black and “Bucky” has a connotation for black people that it doesn’t have for white people. Gruenwald had no idea, but a fan let him know about it. Now informed Gruenwald was able to change the character’s name. Plus, he included the information about Bucky being a slur in the actual text of the book. Thus, he informed unfamiliar fans and offered a more inclusive book at the same time.

Even if creators ultimately reject the feedback, it remains important to hear well-reasoned criticism because it can alert someone to their own blind spots. 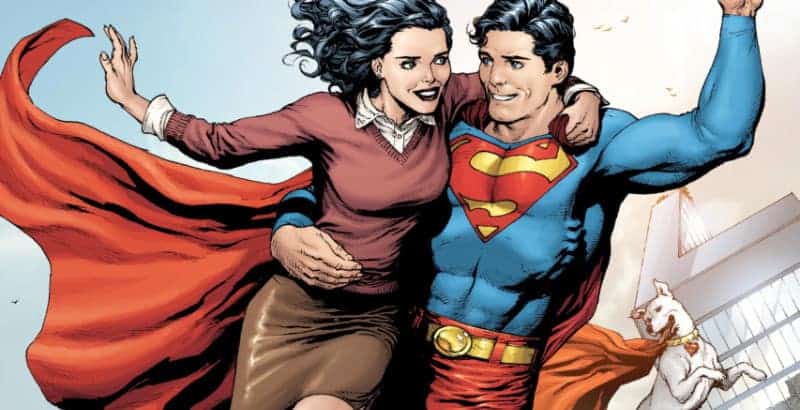 However this controversy shakes out, this is most fans’ favorite conception of Lois and Clark. Partners in love. Equals. Image courtesy of DC Entertainment.

Where Do We Go From Here?

In a perfect world? Creators hear reasonable criticism from readers. They consider and evaluate it. They attempt to make amends for a mistake they made. Even if they reject the criticism, they appreciate the intention. Then they explain their rejection of it with grace and kindness.

That’s a big ask though, I suspect.

Look, I won’t argue comics cannot depict Lois Lane dying. It is, however, something that needs to be undertaken with a high degree of consideration and awareness. Comics has a rather unfortunate legacy when it comes to violence against women. I don’t think King wrote this story to be cruel or misogynistic. He very well may have written it without considering that history though.

In general, it befits people in comics to listen more, especially to those raising concerns. Some concerns? Rejected with ease. For instance, the idea the big two have sought to eliminate white heroes. Others will be weighed and disagreed on. However, this occurs against a backdrop of meaningful and thoughtful engagement by both sides. Others still might just be accurate and need to be fixed immediately, apologized for thoroughly, and worked on going forward. Think the Gruenwald example I used above.

This shouldn’t be a competition about beating the other side. It should be about improving comics for the better. Well done criticism improves comics. Being aware that violence against women in comics doesn’t happen in a vacuum improves comics. You might be scripting one scene, but there’s history that preceded and complicates that scene, like it or not. Generally standing up for our beliefs without assuming the worst of each other improves comics. And that goes just as much for creators assuming the best of those that have issues with their work as it does vice versa.