HOUSE OF X #1 dropped on July 24th, and fans were immediately thrown into what seemed like one of the most groundbreaking X-Men stories ever written! A week later, POWERS OF X #1 came out and demonstrated HOX #1 was no fluke. So far the story that runs through both of these books has been very DAYS OF FUTURE PAST-esque. Sentinels rule a dystopian future where mutants are hunted. It is up to events that happen in the past to keep the hellish future from taking place.

There is one major difference though… there is no time travel involved. How does that make sense? I mean, without time travel, how can our heroes know to undo the future? How can they even know they have to? Well, it is up to one newly revealed mutant to use her powers to save the world. As the storyline begins, after many years (to say the least) of trial and error, she may be able to pull it off.

Sounds like a pretty cool comic right? Well, that’s just the tip of the iceberg with what Jonathan Hickman has been able to accomplish in this amazing story. Let’s go into a little more detail, then you’ll see why you should be reading HOUSE OF X and POWERS OF X.

Setting the Stage for HOUSE OF X and POWERS OF X 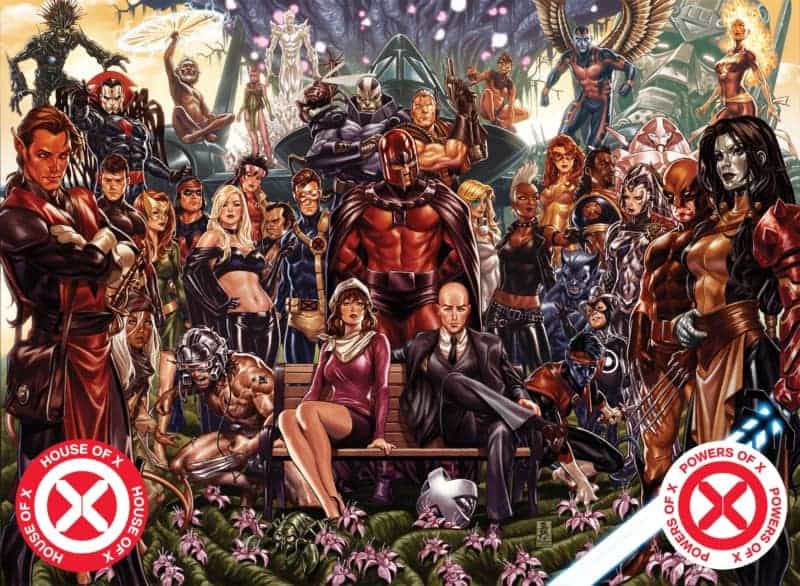 HOUSE OF X #1 starts off with mutants all over the world, as well as on Mars and the moon, planting flowers. As these flowers grow, they become more like vines. Once they reach full maturity, these vines become a portal. The location to which these portals lead is a living island called Krakoa, the same island that captured most of the original five X-Men in GIANT-SIZE X-MEN #1 only to be defeated by the new team of mutant heroes. The original battle with Krakoa probably happened in Moira’s fourth life, but that’s getting ahead of ourselves. (If you get it now, good job, gold star).

However, in HOUSE OF X #1, Krakoa has moved from threat to sanctuary. The unity of all mutants on Krakoa’s surface is lead by Charles Xavier and none other than Magneto. Together, they decided to join forces to create a safe haven for all mutants. The mutant paradise these once-rivals build does have one very important rule: no humans allowed. The mutants want Krakoa to be seen and treated just as any other country would be, and the citizenship laws of Krakoa state that it is a mutant-only island. For the first time, all is seemingly well for the mutant population. 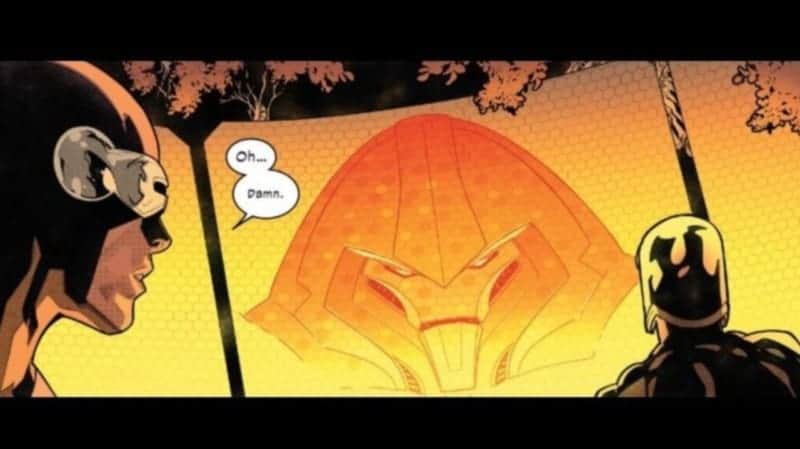 Even though mutant kind has found a reliable safe haven on Krakoa, a threat is looming over the world. A threat which Charles Xavier and Magneto are all too aware of. The threat they know is coming is that of a mutant holocaust. Which brings us back to an earlier question, how do our heroes know for certain of future events when time travel isn’t involved? Well, that question is answered by a familiar character who has been granted mutant powers by Jonathan Hickman himself. Her name is Moira MacTaggert. 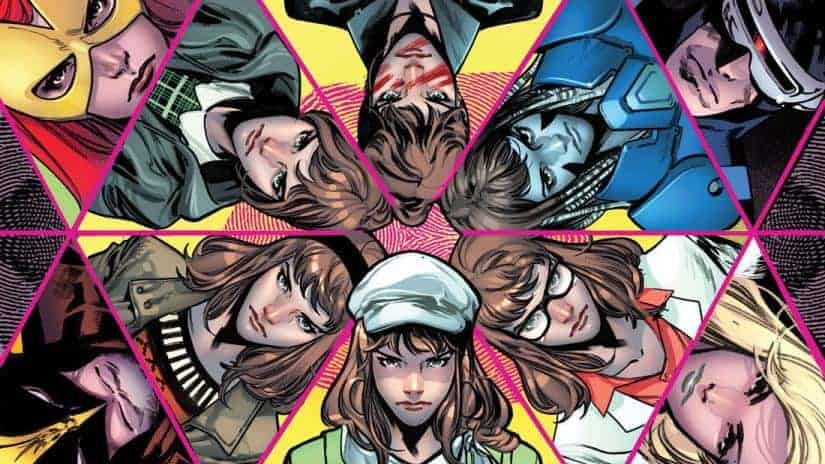 While Moira is introduced to us in POWERS OF X #1 and we know here from previous X-history, we do not really understand her importance until HOUSE OF X #2. In HoX #2, we are introduced to her living a fulfilling yet overall boring life. She is a school teacher who falls in love with a simple man with whom she starts a family, and at the age of 74, she dies peacefully. Nothing special, but in the end she was happy and loved the life she lead. Moira’s death didn’t last long, though. After she died, she was born again, to the same family, under the same circumstances, and in the same year as her original birth. The difference, however, was she remembered everything she had experienced in her previous life. With this proper introduction to Moira MacTaggert, we learn that her mutant power is reincarnation. 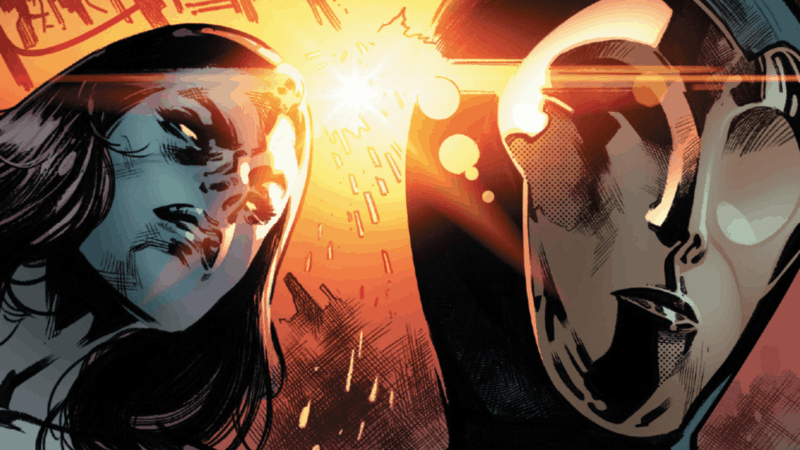 During her second life, Moira, at first, thought she might be crazy. She ran experiments by marking personal historical markers from her first life in order to be certain of her sanity. Moira met her first husband, but knowing what comes of her life after marrying him along with her new found knowledge of her mutant abilities, she does not marry him. Instead, she seeks to find out more about who she is and mutants in general. However, Moira tragically died in a plane crash before any of her questions could be answered.

In her third life, Moira decides that being a mutant is a curse and she seeks to end that curse for herself and any other mutant who wishes to be rid of their abilities. In her third life, Moira develops a mutant cure. While her achievement is great, it does not last very long. The mutant Destiny along with Mystique, Pyro, and Avalanche destroy Moira’s lab and then threaten Moira’s life. Before they kill her, Destiny looks into all of Moira’s potential futures and informs Moira that she only sees ten lives in all that Moira will live, with the possibility of an eleventh. Destiny also tells Moira that if she creates the mutant cure again in any of her future lives, Destiny will kill her each time, until her lives run out. Destiny then tells Pyro to burn Moira alive, thus ending her third life. 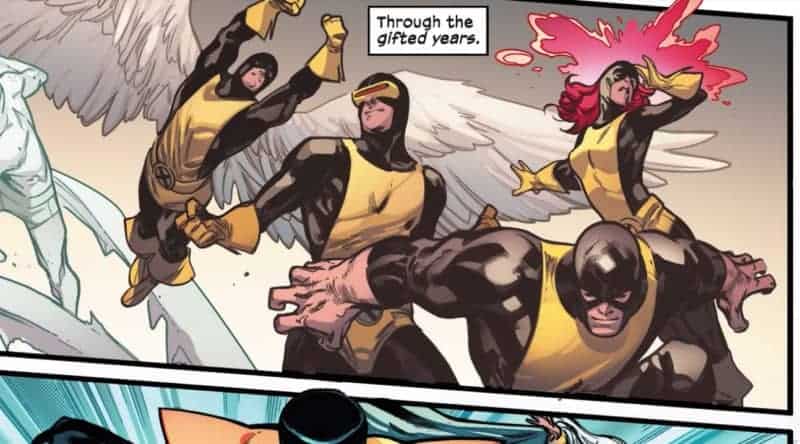 In Moira’s fourth life, she gets together with Charles Xavier fairly early on in their lives. Together they pursue his dream of peace between humans and mutants. She helps him form the X-Men (seemingly as we have known them since their debut in X-MEN #1 (see, I told you you’d get it)). They live out their days fighting injustice and saving the day, that is until the inevitable Sentinels attack. They kill both Moira and Charles and lead the world into a DAYS OF FUTURE PAST future.

In her fifth life, she meets Charles and tells him about everything that happened in the life before. They then together they take action. The two establish a city blocked off from the outside world, a safe haven for mutants. Once the city is established, everything seemingly goes great. That is until the Sentinels attack, thus ending their lives once more. 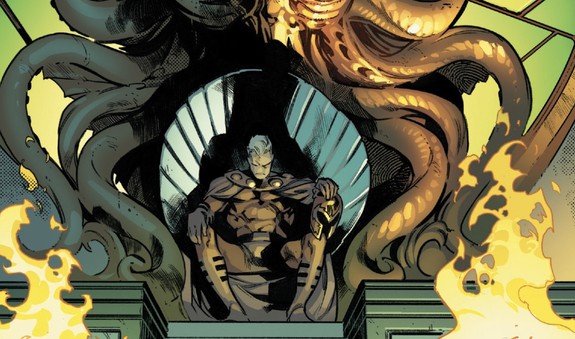 Moira’s sixth life isn’t present in HoX #2 from what I saw and is, as of right now, unknown. In Moira’s seventh life, she decides that the Sentinels need to be taken care of at the source, inventor Bolivar Trask. After coming to this conclusion, Moira kills not only Bolivar, but the entire Trask family. Unfortunately, the Sentinels come into being anyway. Moira then comes to the conclusion that A.I. is no mere invention. It itself is a form of evolution.

In the eighth life of Moira, she decides to align herself with a stronger force than Xavier, so she joins forces with Magneto. After Moira tells him about everything that comes to pass, Magneto loses his mind! He tries to attack humanity by blowing up the White House in true Magneto fashion. The X-Men, Spider-Man, and The Avengers stop him, however, before he can enact his evil plan. 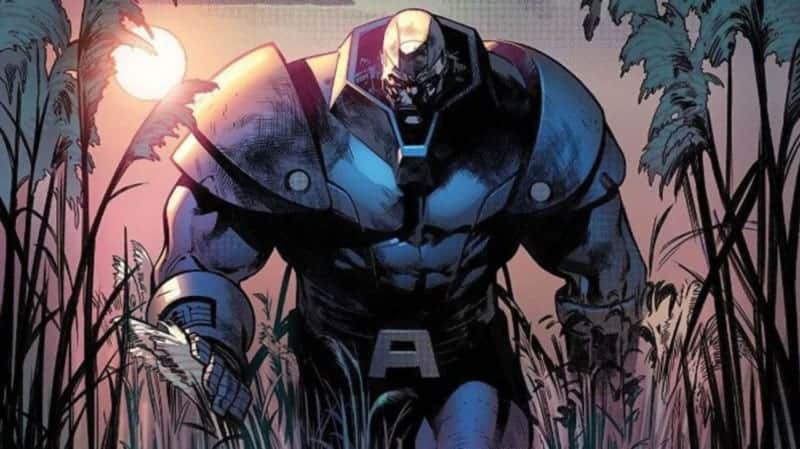 In life nine, Moira decides to go even more extreme with who she aligns herself with. She joins forces with Apocalypse. Together, they bring war to the humans and machines. They come to a realization after one hundred years of fighting, however. Even their most extreme version of the mutant rebellion cannot save the world they live in. The team decides to gather information that will help achieve victory in Moira’s next life, rather than to keep fighting for their current one. After a well orchestrated covert mission to acquire the knowledge of when the Sentinel Nimrod comes online, Moira dies, carrying over that information to her tenth life. Now, we are currently in the tenth life of Moira MacTaggert.

What Has Happened in Moira’s Tenth Life So Far?

While PoX jumps between different lives of Moira MacTaggert, HoX takes place entirely in her tenth life. So far in life ten, Moira has approached Xavier, showing him everything that has happened in her past nine lives. She then convinced him to do something that has yet to be done in her previous lives. Moira convinces Charles to join forces with Magneto, after which they set up the mutant safe haven on Krakoa. Once Krakoa is in place, the mutants begin to take action in preventing the rise of the Sentinels. They needed information that was stored in Damage Control, which is a government facility in New York. 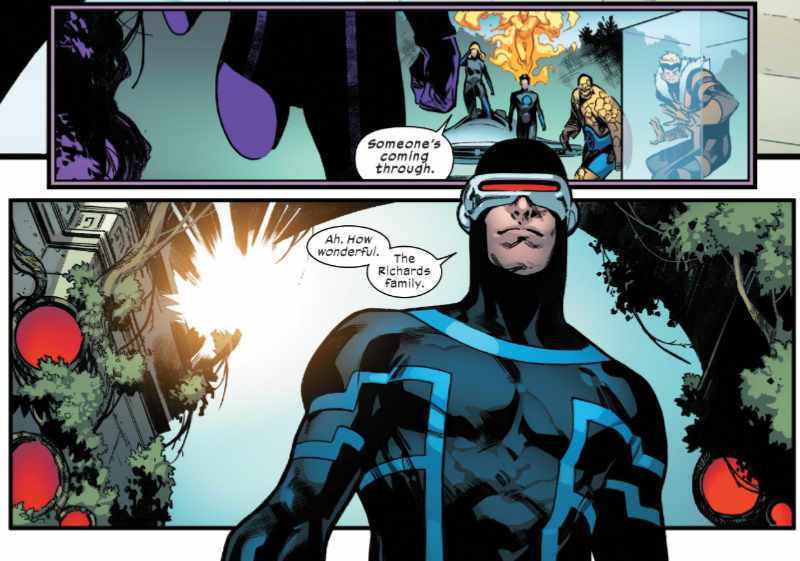 Charles and Magneto sent Mystique, Toad, and Sabretooth to steal the information they required. Though the heist was successful and Mystique and Toad make it back to Krakoa with the information, there was a problem. The Fantastic Four were able to apprehend Sabretooth.

Mystique and Toad obtained the plans to create a Sentinel called the Mother Mold. Mother Mold is the ultimate Sentinel creating machine that, upon its creation, will mean the eventual end for mutant kind. Charles and Magneto must have the Mother Mold destroyed to ensure their own survival. They task Cyclops and the X-Men to carry out their mission.

What Could Happen Next in HOUSE OF X and POWERS OF X? 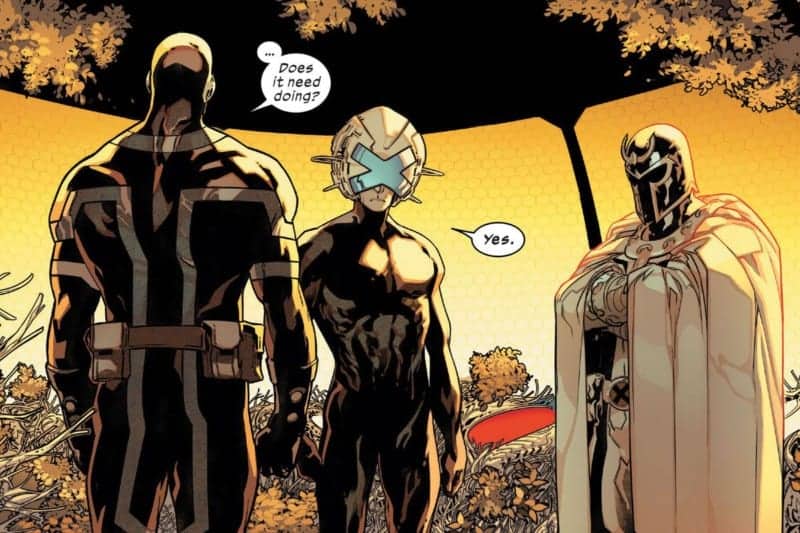 The latest issue in the X-Men saga is POWERS OF X #3 which showed the end of Moira’s ninth life. In this life she aligned herself with Apocalypse and in the end, Moira was able to obtain important information. Moira learned when Nimrod–an incredibly powerful Sentinel that is detrimental to the mutants–comes online. Moira takes the information and then has Wolverine kill her. Thus, allowing her next life to have an edge over the Sentinel forces.

So what will happen next? Presumably the next issue of HOUSE OF X will pick up with the X-Men trying to destroy Mother Mold. Beyond that, however, the story is up in the air. Hickman is a master storyteller, I mean the guy created the Council of Reeds for crying out loud! Every issue has been an unpredictable rollercoaster ride and its one of the best comic storylines I’ve read in years. Whatever happens next, I cannot wait to see it!

So, Why SHOULD You Read HOUSE OF X and POWERS OF X? 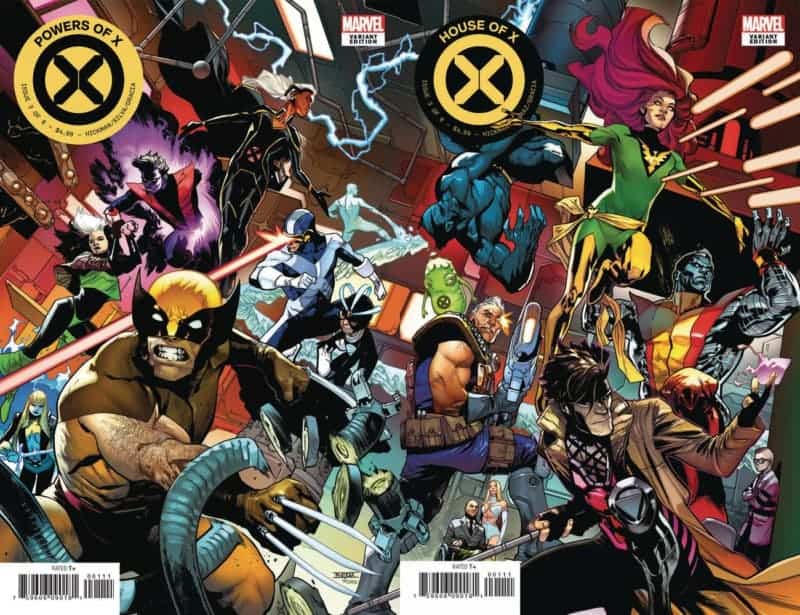 Throughout this article, I have laid out the information you need to know about the overall storyline of HOUSE OF X and POWERS OF X. So, why should you read it? As a fan of the X-Men, I think what Hickman is doing with this storyline is brilliant. He has created a new world for the X-Men without ignoring their history. Hickman has reworked certain characters, and through his redesigns has formed a story that is perfect for long time fans and new readers alike. Seriously, if you’ve never read a comic before but want to start, read HoX and PoX.

Also I’d like to note another subplot that did not get explored above. One thousand years into the future, the beings who inhabit Earth seek “Ascension”. They wish to join with an intergalactic hive mind called the Phalanx. Since as of right now it hasn’t added much to the main storyline, I’ve opted to leave that aspect out. Although, X-Men: Year 1000 adds so much to the overall feel of the comic and will be explored in the future.

So, are you curious about Year 1000 while also wanting to be a part of reading this fantastic new story? Pick up the available issues of HOUSE OF X and POWERS OF X and get to it! I promise, you will not regret reading this amazing comic. Happy reading!